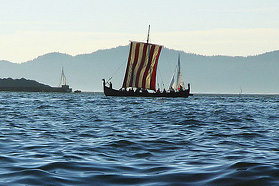 Viking ships were ships used by the Norsemen during the Viking Age. Vikings were exceptional sailors. They crossed the Atlantic, colonized Iceland and Greenland and reached North America. As merchants and mercenaries they travelled as far as Constantinople where they were known as Varangian guard. Viking longships were designed for both rowing and sailing. The prow and the stern had similar construction so that Norsemen did not need to turn around in order to quickly go the opposite way. Longships were also used as the last abode of Norse chieftains. The most well-known ships are those found in Oseberg and Gokstad (Norway). They are now exhibited in the Viking Ship Museum. Over the last years more important Viking longship finds have been made.