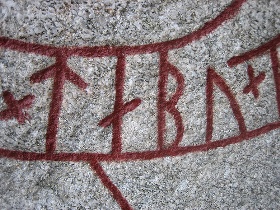 The eldest runestones, inscribed with Norse runes, date from the 4th century. These were the Elder Futhark runes. However, the most of the runestones were created during the late Viking Age and thus inscribed with the Younger Futhark runes. The runestones with Norse runes were usually erected to commemorate one or several deceased kinsmen, and in most cases these people died at home peacefully. Usually, men raised or commanded raising a runestone, while some of them are raised by women, usually widows of the deceased. It is believed that runestones were brightly colored. Nowadays, most of them are painted with falu red, Swedish deep red paint known for its use on wooden cottages and barns. The vast majority of the Norse runestones are located in Scandinavia, but they can be found at all places reached by the Norsemen during the Viking Age: from the Isle of Man to Berezan’ in the Black Sea region. It is interesting, however, that not a single runestone is known to be found in Iceland. Runestones were erected at assembly locations, near roads, bridges and fords. Norse Runestones marked territory, explained inheritance, and told about important events. They remain one of the most striking traces left from the Viking Age.

Photo: Runestone U 164 (one of the Jarlabanke runestones), detail. Courtesy Mararie. Used under the Creative Commons Attribution-Share-Alike 2.0 Generic Licence.