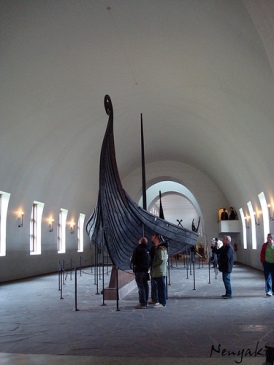 The Oseberg ship is perhaps the most exciting Viking ship ever found. August 8, 1903 Norwegian farmer named Knut Rom visited Professor Gabriel Gustafson of the University Museum of Antiquities in Oslo. There was a large mound within Rom’s farm Lille Oseberg located in Vestfold county, on the western coast of the Oslofjord, near Tønsberg. While digging it, the farmer came across a ship. Two days later it became clear that the find was a Viking Age burial mound with a large ship within it. The excavation began on June 13, 1904, led by Gabriel Gustafson and Haakon Shetelig. By November 5 the Viking ship grave was excavated from the mound. It is amazing that the reconstruction of the vessel took no less than 21 years: as much as possible of the original wood was used, with very few modern elements, like some iron rivets. Wooden objects were sometimes restored from hundreds of broken pieces. Unfortunately, the conservation methods of the time were too far from being perfect, so that many restored details grew as fragile as crisp bread.
Now there should be some some place where the Oseberg ship had to be made available for the public. University Museum could not even house the Tune and Gokstad ships, which were stored in sheds in the University gardens. Professor Gustafson was the author of the idea to build a special museum for Viking ships, which was later constructed on Bygdøy (peninsula on the western side of Oslo).
The Oseberg ship is a Viking ship of a clinker built karv type. Designed for both rowing and sailing, it is built of oak. It is 22 meters long and 5 meters wide. With 15 oar holes on both boards, it had 15 pairs of leaf-shaped oars from 3,7 to 4,03 meters long, according to varying distance from the top strake to water line. Both the prow and the stern are 5 meters high. Ending with elegant serpentine spirals, they are covered by fine carvings in “gripping beast” style, also known as Oseberg style. According to dendrochronological analysis, the ship was buried around 834, but some of its parts date from 800, and the vessel itself is believed to be older.
The seaworthiness of the Viking ship from Oseberg provoked a lot of discussion. The fragility of its construction led to the idea that it was used for coastal voyages only. Some even argued that it was no more than a ritual vessel. A full scale copy of the Oseberg ship built in 1987 sank in Mediterranean during trials. Tests made in ship model tank at Martinek showed that when the vessel was making a speed of more than 10 knots, the bow dug itself into water. These tests probably indicate that the ship was wrongly reconstructed. The New Oseberg Ship Foundation was created, whose goal is to build an archaeologically authentic copy of the unique Viking ship found in Oseberg.
Soon Viking ships exhibited in the Viking Ship Museum, the most visited museum in Norway, will have to leave their present location. It is suggested that they will be moved to a new museum at Bjørvika, which is planned to be open in 2011.