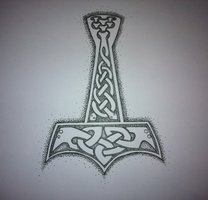 Norse symbol is a rather broad concept. First of all, a Norse symbol is a mark or character, which was used by Vikings as a conventional representation of something. We find such symbols dating back to the Viking Age on authentic artefacts of the period like runestones, swords, shields or decorative elements. Examples of such ancient marks are Valknut, Triquetra and Horn Triskelion. Their exact meaning is hard to reconstruct. There are theories, which may be more or less convincing but the truth remains rather obscure. However, in modern popular culture Norse symbols refer generally to Viking values and lifestyle. There are also wrong concepts like horned helmets: they are universally known and recognizable but do not refer to historic truth.