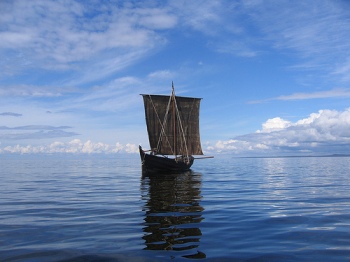 Early this month a team of divers discovered a wreck of a 20-metre long Viking ship at the bottom of Lake Vänern, Sweden’s largest lake. Several Viking ships had been unearthed in Sweden before, but all of them on dry land. This is the first find of such type in Swedish waters. One of the protruding wreck’s ribs was uncovered by chance by a group of 50 coastguard scuba divers who surveyed the bottom of the lake. The rest of the ship was filled with a thick layer of sediment.

Experts will now analyse a wood sample from the ship, as well as iron samples from a spear and a sword found near the vessel. Both the weapons and the clinker-built structure of the boat are similar to earlier Viking Age finds. Six other shipwrecks were found within a 100-metre radius. Three of them were lying almost on top of each other. Even though it would be too early to assert that all the vessels from the spot belong to the same period, Roland Peterson, marine archeologist from the Vänern Museum, feels confident that the latest find is a Viking ship.