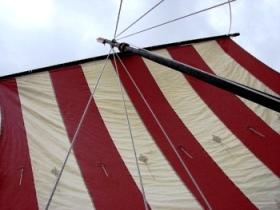 As far as I was able to find out, at least eight important viking ship finds have been reported over the last twelve years. In July 1997 a joint expedition of the Center for Russian Underwater Archaeology and Archeoclub d’Italia discovered a wreck of a 9th or 10th century Varangian ship in Dalnaja Bay near Vyborg, Russia. Sections of the lower part of the hull made of oak boards and a long piece of the keel seemed to be rather well preserved. The planks were fastened together with iron nails, wooden pegs and tarred rope.

In September 1997 ground-penetrating radar located a Viking ship in a burial mound on a farm known as Stein in Hole, Ringerike district, southern Norway. The radar first revealed what might be the contours of a large ship or stones around it. Later one of the extracted cores revealed a ten-inch-thick layer of wood. The Ringerike mound is similar to the Gokstad and Oseberg burial mounds with Viking ships. It was suggested that the Ringerike mound may hold the burial of Halfdan the Black, the father of Harald Hairfair, the first king of Norway. The initial tests showed that the mound dates from between AD 800 and 900.

In December 2003 metal detector enthusiasts discovered a rich trove of Viking artifacts in a ploughed riverside field in Yorkshire, at a site, which is being kept secret. The trove included seven coins of the reign of King Burgred of Mercia, two from the kingdom of Alfred the Great, king of Wessex, a fragment of a silver dirham from Baghdad, fragments of two swords, two sets of scales with weights, a pile of small silver ingots, a belt buckle and strap ends. What is much more important, also boat nails were discovered at the site, which pointed to a 9th century Norse boat burial site. Plans are now underway for a full excavation.

In June 2004, during the largest excavation of a Viking burial site in Norway since the Kaupang dig in the 1950s, nails of a Viking burial ship were found at the Gulli farm in Vestfold, near Tønsberg, south of Oslo. The wood had rotted away, but judging from where nails were found, measurements revealed much about the size and construction of the ship. The graves at the burial site, which lies adjacent to the busy E-18 highway, date from the end of the 8th century to the middle of the 10th.

In September 2006 a boat was found in a burial place near the E6 highway in Bjørnstad in Østfold County, southeast Norway. The ship’s contours were 6.6 meters (21.65 feet) long and 1.4 meters (4.6 feet) wide. The wood had rotted away long ago in the sandy earth, but the nails gave an exact picture of how the ship once looked.

In October 2006 archeologists found the remains of a Viking ship in a burial mound on the Nordheim farm outside Larvik. So many traces of the vessel were found that it should be possible to describe how the ship looked, but it was too early to say whether the ship could be excavated intact. Archeologists also found indications that another ship is buried in the same area.

In September 2007 a Viking longship was discovered under a pub car park in Merseyside. Actually, the workers first unearthed the vessel in 1938, but their foreman, worried that the find could hold up work, ordered it reburied. The sketch of the ship drawn by one of the builders ended up in the hands of his son who gave it to the local museum in 1991, where it lay unread for more than a decade. Now the funds are sought to pay for a major archeological dig to excavate the site.