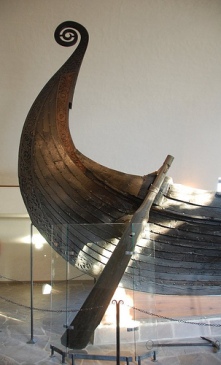 The Oseberg ship was buried in a trench dug into blue clay that preserved the oak almost intact for more than a millennium. The trench was filled with rocks and layers of peat, grass-side down. The Viking ship was tied to a rock, with its bow pointing towards the sea. It had an anchor, but it was not cast. Within the burial, archaeologists found an amazing variety of objects: kitchen utensils, axes, wooden chests, three bed-posts, a chair, two tents, a cart, three sleighs and a sled. It is interesting that the headboard of one of the beds had a Valknut symbol carved on it. Oseberg textiles included woolen garments, silks and even tapestries. On board and outside of the ship skeletal remains of 13 horses, 3 dogs and an ox were discovered. As a grave chamber, a tent-like structure made of logs was erected in the center of the ship. However, the burial barrow was opened early in Middle Ages either by robbers or by descendants of the buried who wished to collect relics. These unknown intruders dug a tunnel into the mound, hacked through the ship’s prow and the roof of the chamber. They took away nearly all the metalware, chopped one of the beds into pieces and disturbed the remains. Skeletons of two women, an older and a younger one, who had been buried on the Oseberg Viking ship were found by archaeologists in the collapsed tunnel.
Remains from the Viking ship were reburied in the Oseberg mound in 1948 in an aluminium casket that was put inside a five-ton stone sarcophagus. However, a few smaller pieces were held back and stored at the University of Oslo. Later Dr Tom Gilbert at the Panum Institute in Copenhagen obtained a DNA profile from the remains of the younger woman. Quite surprisingly, her sample fell into the haplogroup U7, nearly absent in modern Europeans, but common in Iranians, which means that her forefathers may have lived in the Black Sea region. The sample from the elder woman’s remains were too contaminated to provide a clear profile.