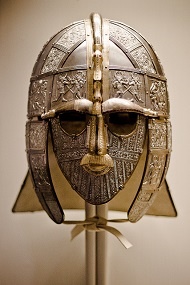 Anglo-Saxon Age in the history of Great Britain is a period of time from the arrival of the first continental Germanic tribes in the 5th century till the Norman conquest in the 11th century. Anglo-Saxon England emerged on the foundation built by the Romans. When their legions left Britain, it grew very attractive for Angles, Saxons and Jutes who formed their first kingdoms there: Northumbria, Mercia, East Anglia, Essex, Kent, Sussex, and Wessex. Viking invasions became a serious threat to Anglo-Saxons, but also helped them to unite under the leadership of Wessex by the 10th century. Anglo-Saxon civilization did not disappear after 1066 when William the Conqueror defeated Harold Godwinson. However, the battle of Hastings marked the end of the Anglo-Saxon Age.