How to Write in Norse Runes

If you want to write something in Norse runes, you have probably discovered that the task is rather challenging. This guide will help you through all the necessary steps. To begin, one has to look into how it works, and then figure out what kind of inscription is needed, since each type of converting into runes requires a separate approach. 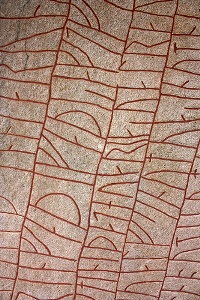 All European and many other languages use Roman letters. It may seem that taking an alphabet devised for one language (Latin in this example) and using it for another one or a whole set of different languages works all right. In fact it took about a millennium to adapt the alphabet we know today for various vernacular uses. The same applies to runes. Runic alphabets cannot and should not transcribe modern languages. We may use them to this end, but we have to invent some rules for this new and unnatural application. The nature of these rules may be illustrated by the following mental experiment: force Seneca who spoke Latin and knew no other language to write the modern German word schwarz (‘black’). To be sure, he would be stuck with both ‘sch’ and ‘z’, since no such sounds (phonemes) existed in his mother tongue. For ‘w’ and ‘r’ he would have only similar counterparts. Perhaps ‘a’ would create no problem. This example might seem forced, but ancient Greek historians had exactly the same difficulties with ancient Persian names. Europeans needed centuries to invent rules that everybody accepted for Roman letters to represent the sounds of their languages. We know these rules as orthography. However, there are no accepted rules for using runes to stand for modern English phonemes. No rules means no way to do it ‘right’.
What’s worse, ancient Germanic tribes did not have any orthography, either. Like both ‘through hardships to the stars’ and ‘thru hardships 2 the stars’ having equal rights to be ‘right’ variants. Runes were used phonetically, that is literally as people heard what they pronounced. So even if you don’t write in modern English, it doesn’t solve all of the riddle. Besides, some words, such as personal names, simply cannot be translated into the ancient Germanic languages for which the original runic systems were invented.

On Right and Wrong

Even though there were no orthographic rules at the age when the runes were in usage, some ways to write them are more or less in line with the historical evidence, while others are not. Thus instead of ‘right’ ways to spell something in runes, I suggest to speak about more or less ‘authentic’ or ‘historical’ variants. Below are some recommendation based on my personal understanding of what ‘authentic’ or ‘historical’ is. By no means do I think that other approaches are ‘wrong’.

The Younger Futhark runes were used for the early form of the Old Norse language during the Viking Age. We do have a grammar and a dictionary for that language but it doesn’t mean that any Old Norse phrase or quote can be easily represented in Younger Futhark runes. The distinguishing trait of this runic alphabet is its use of the same runic sign for voiceless and voiced consonants (p and b, t and d, etc.) and even less logical indiscriminate use of the same runes for various vowels (for instance, the rune úr could stand for u, o, y, au etc.).

This task is usually much more complex than the previous ones. Transcribing words having sounds that never existed in the languages for which runic alphabets were created requires a lot of research. You may want to use my rune converter that works with modern English only. It is based on my own understanding of phonology and is provided ‘as is’ and free of charge.

How to Write a Name in Runes for a Tattoo
How to Translate into Runes Correctly
How to Write an Authentic Runic Inscription
Should I Write in Runes Phonetically?

Next post: My Top 10 Favorite Quotes from Icelandic Sagas