Among the most ancient Elder Futhark inscriptions there are a few words that appear pretty often, but what they actually mean is unclear. According to a subtle remark by R. I. Page, in runology, like in too many other knowledge areas, the following principle has been extensively used as a guideline: “Whatever cannot be readily understood must be sorcery.” Indeed, it is quite tempting to declare that runic formulae, which have no clear explanation, were used with magic purposes. However, in this case such attribution is more or less justified. Certain words (called formulaic) do seem to have been used for magic, even though, in the words of J. H. Looijenga,

“Nobody really knows what these words refer to and why they frequently appear on bracteates.”

Bracteates are gold single-sided disk-shaped pendants manufactured in the 5th and early 6th centuries in Scandinavia. Their use is also unclear: they may be interpreted as regalia, political or diplomatic gifts. In any case, bracteates reflected high social status of their owners. Researchers agree that they are in fact imitations of imperial medallions of the Constantinian dynasty, which are thought to have often been used as magical amulets. According to A. Andrén, the four formulaic words in runic inscriptions may reflect four words frequently used on Roman medallions: dominus, pius, felix, augustus (‘lord,’ ‘upright,’ ‘fortunate,’ ‘worthy of honor’). The formulaic or magic words in runic inscriptions are as follows: alu, laukaR, auja, laþu, ota.

alu literally means ‘ale,’ but why writing these runes on a stone and bury it in a mound face down? This is what was actually done with the Elgesem rune stone (Norway). It is supposed that alu refers to the state between the world of the living and the dead, some kind of extasy or trance caused by an intoxicating drink. Thus the word might have been connected with death-cult, since the dead were often buried with a drinking vessel in order to enable them to participate in the eternal feast. May be alu replaced or symbolized such a vessel. The word ealuscierwen (Beowulf, line 769) contains the same root. It denotes the state of the warriors who stayed in Heorot while Beowulf fought Grendel, and almost certainly means ‘mortal fear’. E. C. Polomé links runic alu to Hittite *aluwanza-, ‘affected by sorcery’. Below: bracteate Djupbrunns-C, Gotland (Sweden), hoard find. Runes alu run from right to left, swastika. 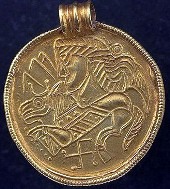 The other magic word found in runic inscriptions is laukaR:

laukaR means ‘garlic, leek’ and the magical use of these runes might have been connected with the notions of growth, fertility and sexuality. A bracteate with these runes might serve as a magical amulet protecting against evil. Some researchers explain this by the fact that garlic was often used as a medicine or antidote.

The possible meaning of auja is ‘good luck’ or ‘hail’. These runes are interpreted as referreing to ‘fortune,’ ‘wealth’ or ‘possession’. Amulets containing auja might be used for protection. Part of inscription on two identical Raum Køge-C bracteates reads: gibu auja, ‘I give luck’ or ‘I give protection’. Enigmatic gagaga on Kragehul I spear-shaft is sometimes interpreted as meaning gibu auja repeated three times.

laþu means ‘invitation’. These magic runes appear only on bracteates. Their use seems to be connected with the calling of supernatural forces.
Another word that is possibly formulaic is ota:

This word is etymologically related with ON ótti, ‘fear.’ The inscription on the two bracteates found in a grave in Donaueschingen (Schwarzwald, Germany) reads: alu ota.

Copyright notice: photo of Djupbrunns Bracteate used in this article is public domain.