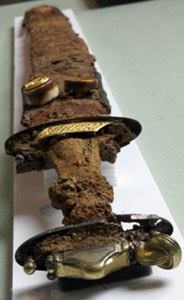 This is a great example of difficulties that anyone has to face while attempting to produce a runic inscription. First of all: why Anglo-Saxon runes? The sword represents the power of a Norse warlord. Should he, or his ancestors, commission the manufacture of such a sword, the Younger Futhark would probably have been chosen. It was a runic alphabet used for ceremonial inscriptions during the Viking Age, an alphabet with which Scandinavian chieftains were familiar. At the period, quality swords were produced within the Carolingian empire, and if they had any inscriptions on the blade they were in Roman letters like +VLFBERH+T or INGELRII. These probably denoted producers or production centers but never characterized the individual weapon as for its meaning or use. Swords of the earlier Merovingian era sometimes had runic inscriptions, like the 5th century weapon from the grave of Theuderic I, excavated at Saint-Dizier, France (above left). The sword bears the formulaic word alu in Elder Futhark runes, but it is engraved on the pommel, not blade.

However, let’s get back to the runic inscription. First of all, it has a misprinting: hægl rune instead of wynn rune (hægl goes right after wynn in the Anglo-Saxon Futhorc, so the reason is clear). A simple double check could have helped to avoid that. But why use two runes (nȳd and gyfu) for ng in ‘kings’? The [ŋ] and [ŋg] sounds were conveyed through a single Ing rune. No less problematic is the use of the cēn rune not calc rune for k. Yes, cēn was responsible for the sound [k] but in Roman letters it corresponds to c, and if we have a modern English text, using cēn for both c and k is confusing. Thus we have SHORD OF CIN-GS instead of SWORD OF KINGS here. To tell the truth, when I first saw the inscription, I thought it said SHORT OF THINGS with a few mistakes. (Shord, by the way, is an interesting word, deriving from Old English sceard, ‘gap’, ‘notch’, from the verb sceran, ‘to cut’, ‘shear’. It is a surname found in Cheshire and Worcestershire in England). All this mess could have been easily avoided using my free online converter that does exactly that: helps people convert English texts into runes without mistakes. I think, a correct variant of what was intended should look like that:

However, if we use Anglo-Saxon runes, I believe modern English is not a great choice. To be sure, it is an easier way, but Ragnar would have it in Old English (cyninga sweord):

To my mind, the best option would be Old Norse translation (konunga sverð) in Younger Futhark runes:

Or else, a Latin text (gladius regum) in Roman letters or Younger Futhark runes:

Indeed, Latin texts were sometimes written in runes in medieval Scandinavia. I wrote about one such interesting example in my blog post back in December 2008: Runic Love Quotes. A wooden stick excavated in Bergen had a Latin line from Virgil written in runes: Omnia vincit amor, et nos cedamus amori (‘Love conquers all; let us too yield to love’). It is dated to ca. 1248 and is known as B145. I didn’t post the original inscription, but an image with normalized runes that I made myself. With time it grew very popular as a tattoo. It is easily recognizable for me, since I know the font I used and the way I normalized the inscription. To my great surprize I also discovered it on Floki’s wedding belt in Season 2, Episode 7 of the Vikings. Even though I did not release the images with inscriptions into the public domain, I still was happy to see my work in this great TV series.

Image of the Merovingian sword from Saint-Dizier is by G. Garitan. Used under the Creative Commons Attribution-ShareAlike 3.0 Unported Licence. Images with runic inscriptions are copyright © The Viking Rune.