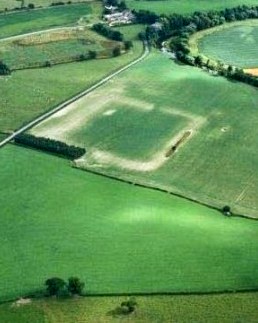 The archeological site at the Gaer Farm (close to Offa’s Dyke at Forden, near Welshpool) was identified back in 1985. Preliminary excavations and aerial photographs revealed a post-Roman settlement, but a proper investigation did not take place until August 2010, when a team from Cambrian Archaeological Projects started an excavation on what seems to be a fifth-century Saxon palace. Both the strategic border location and the magnitude of the building, which is 40m long and 15m wide, point to the fact that this had been a royal residence.Project leader Mark Houliston said it was difficult to date the site, but there are reasons to believe that it is from the Anglo-Saxon period. CAP director Kevin Blockley said that this Saxon timber long house could be a palace of the prince of Wales, a local king or a bishop. He also commented: “We know that West Mercia invaded this part of Wales in 823AD and took over a large area until 863AD. But we plan to carbon-date the charcoal at the site to find out the exact date of the building.” The palace might have looked like a very large barn with a hearth in the centre. Its walls were covered with wattle and daub, the roof was thatched. Palaces of similar style and shape are known in Cheddar in Somerset, Northumberland and at Northampton, but the only other Saxon site in Wales is a burgh at Rhuddlan. This discovery is said to be of national importance.