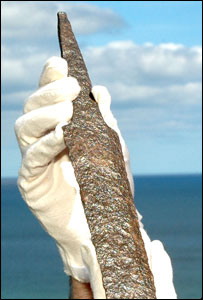 Bamburgh sword is a rare Anglo-Saxon sword from the seventh century. It once belonged to an Anglo-Saxon king or a member of a royal family. The sword was made up of six individual strands of iron: this technique is known as pattern welding, Babmburgh sword thus being a six pattern-welded sword. Cold weapons of such structure are also called ‘snake patterned’ because of the herring bone appearance created by the forged strands. Six strands or layers of carbon steel forged together made it a perfect weapon: in comparison, Sutton Hoo sword had only four layers. Bamburgh sword is the only one of its kind ever found.
The recovery of the sword is rather peculiar. It was dug out during the first excavation at Bamburgh castle, Northumberland, in 1960. After that it was forgotten in the attic of the broadcaster and archeologist Brian Hope-Taylor who took part in the excavations. After his death in 2001, some of his former PhD students came to his house hearing that his books were being sold off. The sword was going to be dumped in a skip by workers who were clearing the house. It was returned to Bamburgh Castle in 2005, where Paul Gething and Graeme Young were working on the Bamburgh Research Project. It is then that the rare nature of the artifact became known. The sword was sent to the Royal Armouries for further examination.
Discovering such a sword is a unique chance for an archeologist. More excavations at the Bamburgh castle may reveal more details as for this exceptional weapon.