The first to appear here is a huge tree. It is symbolic of the world ash tree, Yggdrasil, which is central to Norse cosmology. Gods go to the world tree daily to assemble at their meetings. The imagery of the following scenes connects the characters of the series with various gods of Norse mythology. 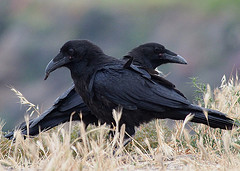 One of Odin’s names is Baleygr, which means ‘flaming-eyed’ and Ragnar is represented with flames emanating from his left eye. Raven symbolism redirects to Huginn and Muninn, two ravens of Odin, whose names mean ‘thought’ and ‘memory’ (this may explain why we see raven feathers as if inside Ragnar’s head). The image of raven is also on Ragnar’s chest. Huginn and Muninn were believed to fly all over the world and bring all kinds of information back to their Master. In the Elder Edda a disguised Odin speaks about his fears that the pair of ravens may not return from their flights. Ragnar’s thoughts are far from home as well. The spear is undoubtedly Gungnir, ‘swaying one’, the magical weapon of Odin. The war between the Æsir and Vanir started when Odin threw his spear over the heads of the Vanir assembly. In Wagner’s Ring of the Nibelung, Wotan’s spear is made of the world tree. This may explain why a tree branch visually transforms into a weapon in Ragnar’s hand.

This connection is instantly obvious since Heimdall, “the whitest of the gods” is the only Norse mythology deity who has gold teeth. Heimdall is described as drinking fine mead in his dwelling. His treasured possession is Gjallarhorn, ‘the loud sounding horn’, which will be blown at the onset of Ragnarök. Floki is indeed pictured with a horn, even though it is a drinking horn. It is to note that, according to the Elder Edda, Heimdall and Loki will kill each other at the end of the world.

Lagertha appears bearing apples on a tray. Here she may represent Idun as a keeper of magic apples that give eternal youthfulness. When the tray is thrown away, it turns into feathers and then into a sword and shield. Feathers refer to Valkyries’ wings. In Norse mythology Valkyries, ‘choosers of the slain’, are creatures who decide which warriors will survive the battle and which will be killed. Those who die are brought by Valkyries to Odin’s heavenly hall, where they feast and are served by Valkyries. It is to note that the sign on Lagertha’s shield may be interpreted as a bindrune that consists of two Elder Futhark algiz runes. The name of the rune algiz means ‘protection’.

King Horik’s skin on the cheek looks like snake’s skin and his eye has a vertical slit for a pupil. It may refer to Jormungand, World Serpent of Norse mythology. This terrible child of Loki and giantess Angrboda, brother to Hel and Fenrir, surrounds the earth and grasps its own tail. At the Ragnarök, Jormungand will be killed by Thor, who will also die poisoned by the serpent. Horik is accompanied by a rooster. In the Elder Edda roosters announce the beginning of Ragnarök.

We see tears of red gold on Aslaug’s face: such tears are shed by Freyja when her husband is away. Pregnant Aslaug is connected with love, sexuality and fertility. However, it is to remember that Freyja is also symbolic of sorcery, war and death. Flowers in her hand look like violets, which sometimes symbolically express the idea of violence. Falcon wing refers to Freyja’s magical cloak of falcon feathers which gave her the ability to fly.

Single-handedness is the primary attribute of Tyr. In order to put chains on the wolf Fenrir, the enemy of gods, Tyr agreed to put his hand into Fenrir’s mouth. When the wolf realized that he was deceived and chained by gods, he bit Tyr’s right hand off.

King Ecbert is pictured with a cross on his chest and feeding a young deer. In Norse mythology, four deer consume the boughs of the world tree. This may indicate the inimical character of the Christian king toward heathen worldview. The cut off hand that he holds only adds to the grim forefeeling.

Sigyn is a wife of Loki. The Elder Edda mentions her only in connection with Loki’s captivity when she holds a bowl under the dripping venom above the face of Loki who was bound by the gods. When the bowl is full, Sigyn needs to pour the venom out, and at that moment Loki shakes violently.

Rollo is pictures bound, which connects him with Loki who was bound by gods with the entrails of his own children. With the onset of Ragnarök, Loki is described as set free from his bonds and fighting against the gods. He will encounter Heimdall and they will kill each other. Does the same fate await Rollo and Floki?