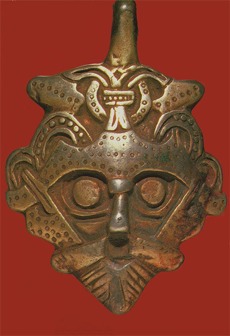 Gnezdovo is an important Varangian center of the ancient Russia that flourished between the 9th and 11th centuries. It is larger than the Viking Age settlements in Birka, Dublin and Ribe. Gnezdovo is perhaps second only to Hedeby, but its unique feature is that no later city is built on the site, so that excavations can be freely conducted. The site was surrounded by the semicircle of burial mounds (kurgans in Russian), up to amazing 6,000 in number, of which only 1,500 exist today, about 1,200 being excavated since 1867, when a treasure trove was discovered by chance on the site during railroad construction works. Since then, eight more treasures were found there. Gnezdovo is equivalent to Smolensk of the Russian annals and Miliniska mentioned by Constantine Porphyrogennetos in De Administrando Imperio from 950s (modern Smolensk is 12 km east of Gnezdovo). It may also be the same as Sýrnes described in Hauksbók, a 14th century Scandinavian geographical treatise. Sýrnes means “swine promontory” in Old Norse, and Gnezdovo is located on a promontory at the confluence of the rivers Dniepr and Svinets, the latter name being related to the Russian word for ‘swine’.
Gnezdovo was located on the portage between the Kasplya and Dniepr rivers on the Varangian Way, the great trade route from Scandinavia through the Kievan Rus to the Byzantine Empire. This was the last portage on the route and the ships might have been caulked here before heading to Constantinople. The name Smolensk is related to the Russian verb meaning ‘caulk’, which is probably not a coincidence.
These lands were inhabited by Krivichs, a tribal union of early East Slavs. Krivichs constituted the majority of the population in Gnezdovo, but up to a quarter of the inhabitants were Varangians. Warriors from Scandinavia seem to be the wealthiest and the leading part of the settlement. The burial rituals of both the Slavs and the Norsemen were similar: the deceased were burnt with their personal possessions, and then a mound was erected over the pyre. What remained after the cremations was gathered into a clay urn. In some cases the urns in the burials were accompanied by utensils, weapons, charms, coins and garments. There are mounds where swords and spears were ritually ‘killed’ as well. The swords were broken and then plunged along with the spears into the pyre. Sometimes shields and helms were put above the weapons, which is considered to be a local development, which is not attested in Scandinavia.
In the 10th century the most magnificent ‘large kurgans’ were erected in the central part of the burial ground. Up to 9 meters high, these mounds remind of Ibn Fadlan’s description of a Varangian chieftain’s burial ceremony on the Volga river in 922. On a high earthen platform a pyre was erected. A ship that was placed on it housed the bodies of men in full armor and women in festive attire. Then everything was burnt and the remains were put into clay urns as described above.
Excavations in Gnezdovo continue to this day. A treasure trove found in Gnezdovo will be exhibited at the upcoming exhibition Vikings: Life and Legend in the British Museum.