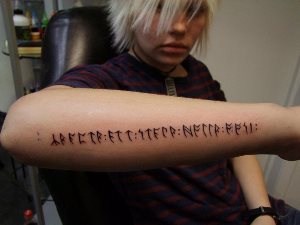 Developing a great design for a tattoo is critical in case you seriously plan to get inked. If you are about to have a Norse or Viking tattoo, I bet you want to include some Nordic runes into it. Tattooed inscriptions in foreign languages or written in unusual characters may well be a source of trouble, especially if you don’t know well the language or the writing system. Online translation tools may play a trick on you: a woman who wanted to have “I love David” in Hebrew on her back, later realized the actual tattoo said “Babylon is the world’s leading dictionary and translation software”. David Beckham inked his wife’s name on his left forearm in Hindi but misspelt it. The tattoo read Vihctoria instead of Victoria with additional h. The name is well known in India because of Queen Victoria, so the person who developed the tattoo design probably wasn’t a native Hindi speaker and even did not know the language well. Perhaps you wouldn’t like to be in such a situation with your runic inscription, would you?

Many runic tattoo designs include a name. You may want to have inked in runes the name of a beloved one, your own name, or a name of a deceased person who was important in your life. Now if we are to spell it in the Elder Futhark runes, we have to look deeper into what spelling is and have a look at the following facts:

So the solution is to keep modern English spelling. It is true that ancient rune carvers did not use it. However, it is also true that they did not have to transcribe words containing sounds like [tʃ] [dʒ] [ʃ] [ʒ]. Should they have to, they would invent a way to do so. Not necessarily combining s and h for [ʃ] as in ‘shame’ or c and h for [tʃ] as in ‘child’. May be they would even invent something more logical than using as many as three variants for one and the same sound [dʒ] as in ‘gin’, ‘joy’, and ‘edge’.

Even though keeping the English orthography eliminates the most of the problems, some still remain. First, there are 26 Roman letters in the English alphabet and only 24 runes in the Elder Futhark. Second, not all of the runes have obvious counterparts in Roman letters, for instance the *eihwaz rune denoted a phoneme with the sound value between [i] and [e]. Since we have *isa and *ehwaz for English i and e, *eihwaz remains unemplyed. Below is a table of letters and their runic counterparts, showing how all this can be resolved:

Note that this way to collate letters and runes is not canonical. It is based on my own understanding of phonology and orthography. No one has ever decreed ex cathedra that such a set of counterparts—fixed as the ‘right’ or ‘correct’ one—should at all exist. There has been no social contract concluded to this effect, either. An algorithm based on this table is behind the rune converter that I developed. You may see other tables of counterparts on the Internet that suggest different solutions. Keep in mind that you may also find phonetic explanations of runes, which were not compiled as a help for those who want to write a name in runic symbols. In such cases as my earlier post the counterparts denote the letters used to transcribe ancient runic inscriptions. Here is also the table for the Anglo-Saxon runes known as the Anglo-Saxon Futhorc:

The Younger Futhark runic alphabet has only 16 runes. It uses one and the same rune for such pairs as [p] and [b], [t] and [d], [k] and [g]. So such names as ‘Tina’ and ‘Dina’ will look the same in these runes. The words ‘Pat’, ‘pad’, ‘bat’ and ‘bad’ will be identical as well. So before any permanent use I would strongly advise to check for all possible readings of the resulting Younger Futhark rune sequence. If the name can be read as some other word as well, you’d better know it before you get a tattoo. For example, the word ‘big’ may be read ‘pig’ as well, which may turn as a rather unpleasant surprise. Since the same rune is used for both [i] and [e], the same word in runes may also be read as ‘beg’ and ‘peg’. Note that there is only one rune for [u] and [o], too. The table for the Younger Futhark runes is as follows:

The appearance of runes in the charts above is not the only possible one. There have been many variants of runes depending on geographical area and historical period. For instance, beside the so called long branch Younger Futhark, pictured above, there was a short twig variant as well. Later it was transformed into the so called medieval runes.

Note that the principles set up in this article are apllicable not only to names, but to any word, phrase or text in English as well (however, not to Old Norse texts).

A Guide to Writing in Norse Runes
How to Translate into Runes Correctly
How to Write an Authentic Runic Inscription
Should I Write in Runes Phonetically?