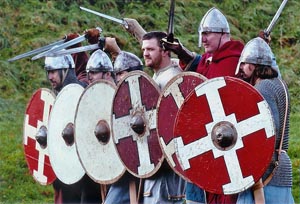 For defense, Vikings used large circular shields. Usually, the size of the Viking shields varied between 30″ and 36″ (75 – 90 cm). The shield excavated at a Viking fortress Trelleborg (Denmark) in 2008 was 33,5″ broad. No less renowned are shields from Gokstad Viking ship burial (Norway). With the end of the Viking Age the traditional circular shape was replaced by Continental kite shields with elongated bottom edge that ensured more protection for legs. Viking shields were used as the means of defense in battle, but for ship crews they also functioned as protection from waves and the wind, being fastened to gunwales (the upper edge or planking of the side of a Viking longboat).

How to Make a Viking Shield

Unlike oak, timbers that were used to build Viking shields were not likely to split. The thin planks had to absorb the energy of sword blows. The fibers bind around the sword blades, which stuck in the shield. In general, combat techniques of the Vikings seem to suggest shield movements that deflected blows rather than blocked them. At least, the thin and light construction of the Viking shield may point to such use.

One of the widespread warfare techniques was forming a ‘shield wall,’ when warriors formed a line so that each shield was overlapped from both sides by the other warriors’ shields. The wall had to be strong enough to prevent the enemies from penetrating through it.