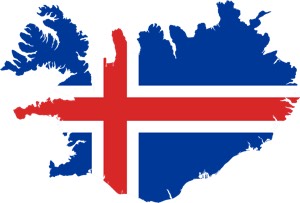 1. In Iceland, prohibition of alcoholic beverages came into effect in 1915.

2. Prohibition was partially lifted for wines in 1922, because Spain and Portugal refused to import Icelandic salted cod unless Iceland imported Iberian red wine.

3. Beer remained illegal in Iceland until 1989.

4. In 1956 boxing was banned here. In 2002 amateur boxing was allowed under strict conditions, but professional boxing is forbidden until this day.

5. Geothermal fields cover up to 20% of the country’s electricity needs.

6. Icelandic horses display two additional gaits as compared to all other breeds.

7. In Iceland, if something is sold at a sale price for six consecutive weeks, that discounted price becomes the new regular price and it cannot be advertised as the sale price any more.

8. Selling panties, boxers, thongs, and jock straps with the Icelandic flag on them is forbidden here.

9. In Iceland it is illegal to sell or advertise products of foreign origin with an image of the Icelandic flag.

11. Iceland does not have army, navy or air force, only the coast guard. If an Icelander wants to serve in the military, they can join the Norwegian army according to an agreement between the two countries.

13. Consumption of Coca-Cola per capita here is higher than in any other country.

14. Icelandic state has a monopoly on the sale of alcohol.

15. The sale of food items containing more than 2 grams of trans fat for every 100 grams is forbidden.

16. The majority of Icelanders don’t have surnames.

17. A family name can be inherited (mostly from foreign parents), but since 1925 it is illegal to adopt new family names.

18. Women do not take their husbands’ names, because usually there is no such name to take.

20. Second names of Icelanders are names of their parents plus the word ‘son’ for men and ‘daughter’ for women. The second name of a man whose father’s name is Jón would be Jónsson (son of Jón). The second name of Jón’s daughter would not be the same, but Jónsdóttir (daughter of Jón).

21. Icelandic second name may be derived from a parent’s middle name, not the first name. Occasionally also the mother’s name is used.

22. Icelanders formally address others exclusively by their first names, even their prime minister.

24. Reykjavík is the only city in Iceland and its capital city. Its name means Bay of Smokes. Other centers of population are small-sized villages.

25. If Icelandic parents give their child a name that has not been previously used in Iceland, that name has to be approved by the Icelandic Naming Committee.

26. The mosquitoes are not found in Iceland and Faroe Islands, the only countries in the world where they do not exist.

27. Christianity was adopted by Icelanders in 1000.

28. The last Roman Catholic bishop in Iceland was beheaded in 1550.

29. Between 1625 and 1683 twenty one Icelanders were burned alive for their supposed practicing magic.

30. Evangelical Lutheran Church is the state church of Iceland.

31. Icelanders can understand texts written in their language over 800 years ago.

32. Iceland is not a very cold country. The average temperatures for January is -0.4°C.

34. Iceland is home of one of the world’s oldest democracies. The Althing, Icelandic parliament, was established in 930.

36. 60% of Icelandic population live in Reykjavík.

37. The country has the highest rate of cinema attendance per capita in the world.

38. The smell of Hákarl (fermented shark), traditional Icelandic food, is so strong and particular, that it may cause you to vomit.

39. Iceland was the first country in the world to have a democratically elected female head of state.

40. Not a single runestone has been found in Iceland until today.

41. About 11% of the country’s territory is covered by glaciers.

43. During the last two centuries, 30 post-glacial volcanoes have erupted in Iceland.

44. The highland interior of the country is uninhabited.

46. The most common Icelandic names are Jón and Anna.

47. Several scenes of Lara Croft: Tomb Raider were filmed on an Icelandic glacier.

49. Puffin is one of the most popular birds in Iceland.

50. Geothermal water heats about 90% of homes of the country.

52. Öskjuvatn is the deepest lake in Iceland. It was formed as a result of a volcano eruption in 1875.

54. In 1963 a new volcano appeared in the Atlantic near Iceland.

55. Greenland was colonized by Icelanders in 986.

56. In 2009 Icelanders applied to European Union for membership.

57. Rabbits were first imported to Iceland from Spain in 1976. Some were released into the wild.

59. The first known fire and plague insurance policy was issued in Iceland in 1151.

61. English word geyser derives from the Icelandic Geysir, a name of a geyser that may not erupt water for years. When it does, the boiling water is hurled up to 70 meters in the air.

62. Male orca named Keiko, who was captured near Iceland in 1979, starred in the Free Willy movie. In 1998 he was returned to Icelandic waters.

63. The ‘Game of the Century’ between Bobby Fisher (US) and Boris Spassky (USSR) took place in Reykjavík in 1972.

64. According to 2007 statistics, Icelandic men on average work 10 hours more than Icelandic women every week.

65. Very few trees remain in in the country today, since for a long time they have been used for timber and firewood.

66. In 2004 Mountain Avens was chosen as the Iceland’s National Flower.

68. Geologically, Iceland is one of the youngest islands in the world.

69. Iceland was one of the latest places on earth to be settled by humans.

70. The rate of literacy among Icelanders is the highest in the world.

71. Only 1% land in Iceland is considered arable.

72. Only a quarter of the country is covered with vegetation.

73. Iceland is located just south of the Arctic Circle.

74. On average, the country is populated by three people per square kilometer.

75. Arctic fox is believed to be the only native animal of Iceland. Domestic animals first came there with the settlers.

76. The country’s national sport is handball.

77. The Hvalfjörður Tunnel near Reykjavik is one of the longest underground tunnels in the world.

78. Icelandic counterpart of Santa Claus are Yule Lads. They are 13 in number.

79. The most common fish caught near Icelandic coast is cod.

80. Iceland could generate electricity for all Europe, but the difficulty is to transport it there.

82. In Iceland owning a pet snake, lizard or turtle is against the law.

83. The majority of Icelanders believe in elves.

84. The main industry in Iceland is fishing and fish processing.

85. Reykjavík is the northernmost capital city in the world.

86. Banking collapse in Iceland is the largest suffered by any country in economic history as compared to the country’s size of economy.

87. As a result of two referendums held in 2010 and 2011 Icelanders rejected a proposal to pay 4 billion Euros to the UK and the Netherlands after the collapse of the Icesave bank.

89. The number of Catholics in the country is under 2% of the population.

90. The eruption of the Icelandic volcano Laki, known as the Mist Hardship, in 1783-84, caused the famine that decreased the population of Iceland by about 25%.

91. Iceland’s revenue from whale watching exceeds any income from whaling.

92. Fish and fish products constitute more than 70% of Icelandic exports of goods.

93. Vatnajökull National Park is the largest in Europe.

95. Nearly every known type of volcanic activity is found here.

96. Dettifoss waterfall on the Jökulsá á Fjöllum river is the most powerful waterfall in Europe.

97. Drinking water piped to Icelandic homes is very pure, it is not even chlorinated.

99. Icelandic government offered an island to Björk, but she turned down the offer.

100. Eyjafjallajökull was probably the most complicated word the newspersons around the world had to learn in 2010.