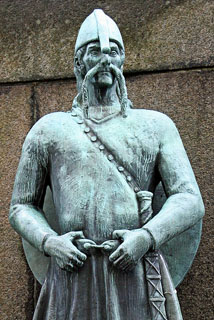 After emerging from bankruptcy last year, MGM is going to produce a new TV series on Vikings. The project’s executive producers are Michael Hirst and Morgan O’Sullivan. This team has already proved to be successful in both Camelot and The Tudors. Producers/managers Sherry Marsh and Alan Gasmer also take part in the project. MGM Vikings saga is reported to be a 10-episode series (or is it only the first season?). Lately premium cable channels have had a lot of success with period dramas like Rome or Spartacus. To be sure, MGM Vikings series will attract attention.
Hirst, who wrote all the episodes for The Tudors, will write the most of the Vikings series, too (Vikings is the working title). Hirst is said to have authored an unproduced script about Norse warriors years ago. Let us hope that as a historian he will be able to produce a great period drama about the Viking Age. The production will begin next year in O’Sullivan’s brand new studio facility in Ireland. MGM is paying the cost outside Canada and Ireland (it will be a co-production of the two countries). MGM will also distribute the series in the U.S. and internationally.
The plot centers on Scandinavian, British and Irish history from the late-8th to the mid-11th century. The series’ main figure will be a Viking commander named Ragnar Lodbrok who once ruled Denmark and Sweden. The historic epic is going to be either a complete failure, like many Viking movies before it, or something exceptional. As Mel Gibson’s Viking movie project seems to be postponed if not abandoned, MGM Vikings series will have to meet the high standards of Gibson’s historical dramas.