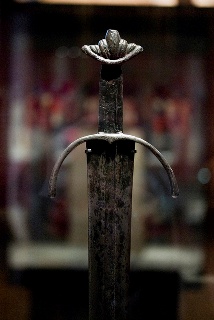 The Cawood sword is probably the finest Viking sword ever found. It was discovered in the River Ouse near York in the 19th century. The pommel type is characteristic for the Viking Age swords, while the shape of the guard is more like the ones found in 12th century weapons. This fact inclined many to believe that either the guard or the whole sword is later than the Viking Age (spanning late 8th to 11th centuries). The riddle might remain unsolved, but an almost identical sword was found in Norway. This weapon, known as the Korsoygaden sword, features a runic inscription on one of the bronze fillets that once bound the now missing grip. Both the type of the runes and the circular shield with which it was discovered allow to date it to 1100. The Cawood sword, which seems to be made by the same craftsman, should be placed around the same date.
The elegance of this sword is remarkable. Perhaps it belonged to a ‘weapon fashionista’ of the late Viking Age. Not only its appearance, but also its quality as a cold steel is outstanding. Its exceptionally high carbon content shows that the sword was made of the hardest steel available at the time. It is possible that this also explains the amazing state of preservation of the Cawood sword. According to another theory this may be attributed to the low oxygen levels in the river mud.
Mysterious is the inscription that runs down the blade of the sword. On one side, it’s in capital Roman letters that do not form known words. On the other side, it’s in Lombardic script, undecipherable as well. They suppose this may be a spell or Bible quote that was believed to give invincibility.
Until the 1950 the Cawood sword was displayed at the Tower of London, but then it was sold to a private collector. After almost 50 years in private possession, it was acquired by the Yorkshire Museum in York.