Maximus: The End of Roman Britain 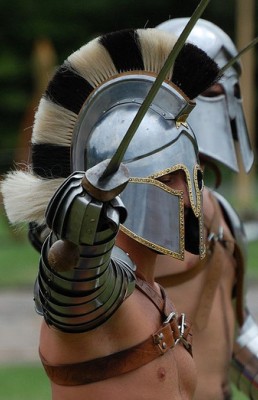 The power of Romans in Britain first weakened early in the 4th century. The main reason was economic crisis. Moreover, along the usual incursions of Scots and Picts, fierce attacks by Saxons, Attacotti, and Franks worsened the situation. Romano-British population was overwhelmed by the extraordinary conspiracy of the barbarians who acted in concert. In 367 a joint raid of Celts and Anglo-Saxons devastated the country, after the Roman garrison on Hadrian’s Wall rebelled and let Picts into Britannia. Nearly all Roman outposts and settlements fell into the hands of the invaders. Rome sent Theodosius the Elder, who was able to restore order.
However, in 383 a rebellion broke again. It was led by Magnus Maximus, who served under Theodosius. This Maximus has a lot in common with the main character of Gladiator, a 2000 historical epic by Ridley Scott. Like Maximus Decimus Meridius from the movie, Magnus Maximus was a Spaniard and a distinguished general of the Roman army. He as well challenged the emperor and his son was executed (the fate of his wife is uncertain). Strangely enough, Wikipedia article on the Gladiator movie does not cite Magnus Maximus among the historical figures who inspired the protagonist of the film.
Assigned to Britain in 380, Magnus Maximus was proclaimed emperor by the Roman troops in 383. Taking a huge part of the British garrison, Maximus conquered Gaul and later Spain and Africa. It is interesting that he was the first ruler in the history of Christianity at whose order Christians were executed for heresy by other Christians (the civil charge was the practice of magic). The heresy was Priscillianism and the executed were Priscillian and his 6 companions. In 387 Maximus forced the emperor Valentinian II out of Rome, but the next year he was defeated in the Battle of the Save, after which Maximus was killed.
Roman troops remaining in Britain successively elevated three usurpers who were quickly overthrown. The last of them, a common soldier named Constantine, took all Roman soldiers to Gaul in 407. They never came back.
After the legions left Britain, emperor Honorius advised the Romano-British to “look to their own defences”. It was the end of Roman administration. Adventus Saxonum was at hand.