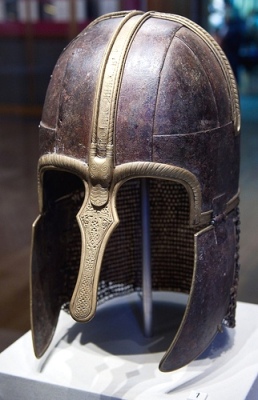 The Coppergate helmet (York helmet) was found in May 1982 at a site where many Viking Age artifacts had been discovered previously during the archeological excavations. The Anglo-Saxon helmet was right beneath the surface, protected by a brick chimney above. It was created about AD 750-775 but deposited considerably later: the brass decoration was already worn. There are also evidence of using the helmet in battle. Then someone buried it in a wood-lined pit along with a few other objects. It is unclear why such a fine possession was hidden, but it attracted universal attention after it was struck by the claw of a mechanical digger 28 years ago.
After careful excavation and reconstruction the quality craftsmanship of the Coppergate helmet became evident. It was made of iron, with two cheek-plates and a well-preserved mail curtain. Its characteristic feature is a long nose-guard. Both the guard and the edge of eyebrows are richly decorated with brass ornamentation (tests revealed that it contains about 85 percent copper). The framework of the helmet consists of four main elements: a band of iron encircling the head; the brow band to which another band is riveted, running from front to back over the crown; two shorter bands run over the ears. The four spaces between these bands are filled with triangular plates.
The brass strips running from ear to ear and from front to back bear a Latin inscription that reads: IN NOMINE : DNI : NOSTRI : IHV :  SCS : SPS : DI : ET : OMNIBVS : DECEMVS : AMEN : OSHERE : XPI. The last segment of the inscription represents the first three letters in XPICTOC, Christ in Greek. Oshere is an Anglo-Saxon personal name. The initial part of the inscription seems clear: In the name of our Lord Jesus Christ, the Holy Spirit and God [the Father]. What follows received various interpretations: …And with all we pray. Amen or: …And to all we say Amen or else: …Let us offer up Oshere to all saints. Amen.
The Coppergate helmet is currently on display at the Castle Museum in York.