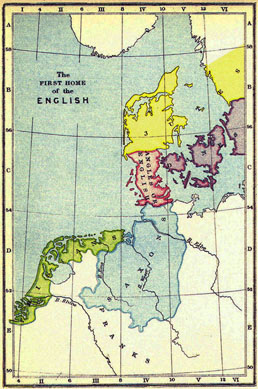 Incursions of Germanic warriors into Britain started late in the 4th century, during the Migration Period in Europe. Roman authors called them Saxons, but they certainly were divided into multiple ethnic groups. According to Bede the Venerable, armies of the invaders comprised representatives of the “three most powerful Germanic peoples” of the time: Angles, Saxons and Jutes. In the 6th century Procopius of Caesarea wrote that Britain was “inhabited by Angles, Frisians and Britons, each with their own king.” This testimony is supported by linguistics, since Old English and Old Frisian are closely related. Modern researchers believe that a wider range of Germanic peoples, including Franks, actually moved to Britain at the time.
Angles as a people are first mentioned by Tacitus, who names them among seven tribes who worshipped Nerthus or Earth Mother in an insular sanctuary. The description suggests the idea of coastal regions, but it is unclear whether the North or Baltic Sea is implied. Ptolemaeus locates the Angles to the west of the middle Elbe. In the Anglo-Saxon oral tradition, as reflected in the poem Widsith (written down in the 9th century), king Offa marks the border of his kingdom at the mouth of the Eider river. All this points to the southern part of the Jutland (Cimbrian) Peninsula as the original home of the Angles.
According to Bede, Jutes inhabited the lands that lay to the north of the Angles. As for the Saxons, Tacitus does not mention them, while Ptolemaeus reports that their home was at the isthmus of the Jutland Peninsula.
As it seems, by the 3rd century Saxons moved southward and merged with Chauci. Along with the Frisians they occupied all the territory between the Elbe and the Weser, so that Romans had to enforce their fleet in the English Channel to stop Saxon piracy in the coastal waters. Eleven fortresses were erected from the Wash to White Island, on both sides of the Channel, which were called the Saxon Shore (Litus Saxonicum per Britanniam). It was led by the Count of the Saxon Shore (Comes Litoris Saxonici).
When Roman legions left, the local population proved to be defenceless. Under constant attacks of Scots and Picts a king of Britons named Vortigern invited two Anglo-Saxon leaders, brothers Hengest and Horsa, to serve as mercenaries. This was the beginning of the Anglo-Saxon invasion.