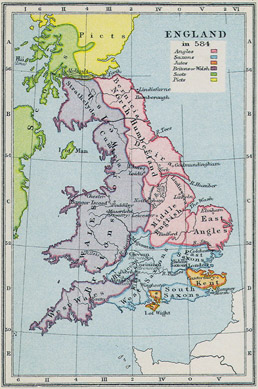 The first armed conflict of Hengest and Horsa with Vortigern took place in 455. About the same time Horsa was killed in battle, while Hengest carried war on the Britons. By 473 he founded the first Anglo-Saxon kingdom, the kingdom of Kent. His successors were Esc, Octa and Eormenric of Kent (relationships in this line of kings and exact dates of their rule are not clear).
The next stage of the conquest was led by the Saxon war-lord Ælle, who landed with his three sons on the Sussex shore in 477. In 491 he besieged and took the shore fort Anderida. Bede mentions Ælle as the king over all the provinces south of the river Humber. The Anglo-Saxon Chronicle lists Ælle as the first of the eight bretawaldas (a term that designated “rulers of Britain”), which may indicate that the king of the South Saxons was recognized as the ruler by other Anglo-Saxon leaders.
Wessex was founded in 495 by Cerdic, who landed in Hampshire “in three keels”. The Chronicle also attributes to Cerdic the conquest of the Isle of Wight, which was later given to West Saxons Stuf and Wihtgar. Cerdic was succeeded by his son Cynric.
During the first half of the 6th century Anglo-Saxons extended their lands westward and northward, but their efforts did not prove very successful, despite the arrival of new Anglo-Saxon armies from the continent. Between 490 and 517 Anglo-Saxons were defeated by the Britons at the Battle of Mount Badon. The Celts were able to unite against them and delay the advance of invaders for some time.
The onslaught of the Anglo-Saxons was recommenced in the second half of the 6th century. In 571 and 577 three kings of Britons were killed, Gloucester, Cirencester and Bath were captured. During 584–592 the Celts were completely defeated in Wiltshire. By the beginning of the 7th century Anglo-Saxon conquest of the south-western and central parts of Britain was accomplished.
At least twelve early Anglo-Saxon kingdoms existed at the period. On the eastern coast there lay the kingdom of Lindsey, comprising the lands between the Humber and the Wash; the kingdom of the East Angles, which consisted of Norfolk and Suffolk; the kingdom of Essex and the kingdom of Kent. The kingdom of Sussex was on the southern coast. Northern part of the central England was divided between Mercia and Middle Anglia. To the south, along the border with Wales, two small kingdoms were situated: Magonsætan and Hwicce. The largest early Anglo-Saxon kingdom was Wessex, the kingdom of the West Saxons. Northern territories were later known as Northumberland or lands to the north of the Humber. At times Northumberland was divided into Bernicia and Deira.
These kingdoms, once created, waged war against each other until the first half of the 9th century. This period of the Anglo-Saxon history is known as the Age of Heptarchy.