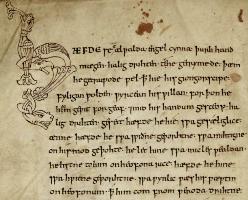 How many loanwords from Old Nose are there in the standard English language? Viking origin of the words ‘ransack’ and ‘slaughter’ probably would not surprise anyone, but very “peaceful” words like ‘leg’, ‘sky’ or ‘window’ are also of Scandinavian provenance. The verb ‘get’, one of the most used in English, was actually borrowed from Old Norse. Meaning of the loanwords and the grammatical category to which they belong, if properly interpreted, may be a rich source of information on Viking settlement and subsequent assimilation of Norsemen into the culture of England. This is what the research of Dr Sara Pons-Sanz of the School of English Studies (University of Nottingham) aims at. The project, which is funded by the British Academy, examines all the Viking words that were borrowed from Old Norse to Old English. Words such as ‘husband’ that point to social relationships show that Norsemen integrated quickly. The other sign of cultural assimilation is disappearance of Old Norse as a spoken language in England by the 12th century. How deep the assimilation was is seen in the loanword ‘they’. It is a pronoun, a very difficult word to adapt into a new language. Dr Pons-Sanz researched the texts of legal codes, homilies, charts, literary works and inscriptions. Chronological and dialectal analysis allowed to track the process of integration for certain words. For instance, the word ‘fellow’ (ON félagi ‘business partner’) was first attested in East Anglia.
The list of Old Norse loanwords below is far from being complete. However, it gives rather representative examples of Viking cultural assimilation in England.