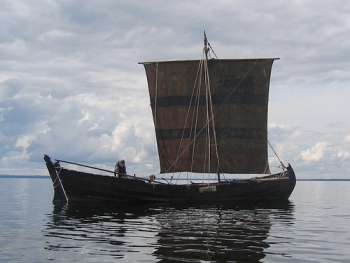 The 13th Warrior was released in 1999. Rumored to be a loss of $100 million at the box office worldwide, it is not the best film by McTiernan (Die Hard, The Thomas Crown Affair) in any sense. However, it was rather entertaining to watch it again, taking a few notes in the process. From the very beginning, the plot struggles to combine two realities: Norse Vikings and their habits as described by Ibn Fadlan in the 10th century, and the 5th century epic Scandinavians as described in Beowulf, Old English heroic poem. The Wendol, whom the Vikings finally have to oppose, seem to be a prehistoric tribe (all this based on Eaters of the Dead

by Michael Chrichton). At the start of the film we see a map, where Baghdad is to be found between the Black Sea and the Caspian Sea, thus located in the Caucasus instead of the Tigris River. The Caliph of Baghdad sends away Ahmed Ibn Fadlan (Antonio Banderas), who was seduced by a merchant’s wife, to be an ambassador to the Volga Bulgars. Accompanied by Melchisedek (Omar Sharif), his mentor and manservant, Ibn Fadlan travels along the Volga river, where he is attacked by Tartars (in fact Tartars or Tatars would not appear in these lands until the 13th century), after which he encounters a group of Viking warriors. What happens next is based on the actual account of historical Ibn Fadlan.
There are a few things about Vikings in The 13th Warrior that deserve to be mentioned. One of them wears a Roman Gladiator helmet, which is very unlikely but still theoretically possible. However, the Spanish Morion helmet, worn by another Viking, was not invented until the 16th century (Ibn Fadlan met Vikings in 922). One of the warriors is a Celt and wears a Scottish kilt, which was not developed until the 16th or 17th century, either. The Vikings speak Bokmål, one of the two Norwegian written standard languages, and Danish in one instance. However, on the Volga river, one would expect to meet Vikings from Sweden. At all events, they would rather speak Old Norse, since Norwegian, Swedish and Danish languages developed later in history. Melchisedek tries to speak to Vikings in Greek: he repeats something like ἡγεμόνα ὑμέτερον, βασιλέα ὑμέτερον (hegemona hymeteron, basilea hymeteron), which means “your chief, your king” in the accusative case, which makes little sense without a verb. Moreover, the first time Melchisedek says hymereton instead of hymeteron. One of the Vikings answers in a rather good Latin: Noster rex tabernaculo. Non loquetur, quia mortuus est (“Our king is in the tent. He will not speak, since he is dead”). The conversation continues in Latin, but the DVD subtitles continue to say: [speaking Greek]. Later on, Ibn Fadlan studies the language of Vikings simply by listening to them, over a very short period of time. To show how the Arab traveler was first able to understand only parts of phrases, Vikings’ speech is heard to be a strange mix of English and Norwegian, like “Do not fortelle my wife, for jeg will be coming.”
All in all, I’ve had a lot of fun watching The 13th Warrior again, ten years later. Without obvious goofs it would probably become rather boring.