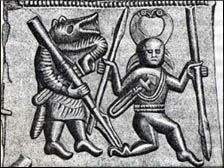 To the left is the mirrored image of one of the four cast-bronze dies from Torslunda, which were used for striking helmet-plates. It is mirrored advisedly, in order to get the actual image that appeared on the helmets when the matrice was applied to them. This die (dated to c. 600) was found at Björnhovda in Torslunda on Öland. It is famous because of the bird-horned dancer, an image that gave rise to a lot of speculation. It was suggested that the man with two spears represents Odin, since berserkers and úlfhéðnar were special Odin’s warriors who wore pelts of bears and wolves. Correspondingly, the other figure on Torslunda die was interpreted as either bear-warrior or wolf-warrior. Identification of the bird-horned man as Odin was further endorsed with the aid of the Stockholm Archaeological Research Laboratory’s laser scanner, which mapped the surface of the matrice and proved that the man is one-eyed. It is interesting that the right eye on the matrice (the left one on the resulting helmet plate) was initially present, but removed with a sharp instrument during the manufacturing process. Note that the horned helmet (or horned hat) has strange “ears” below the horns. Another interesting fact is that the horned man is wounded by a spear in the heel. The same features are present on the so-called “dancing warrors” plate from the Sutton Hoo ceremonial helmet (dated to the 6th century):

The plate is on the front side of the helmet (photo above to the right by RahelH_, used under Creative Commons Attribution 2.0 Generic Licence), so the meaning it was supposed to convey was deemed to be very important. The protrusions on the warriors’ helmets also have bird heads, the helmets also have “ears” visible on Torslunda die discussed above. However, this image features another stage/variant of the sacred or ceremonial dance. Torslunda warrior holds two spears in both hands: one spearhead up and the other down, his sword being sheathed. Sutton Hoo weapon dancers hold both spears in one hand, both spearheads down. The unsheathed sword is in the other hand. At least one of the warriors (the other was reconstructed) wounds himself in the heel (or merely aims at his heel). Two more spears seem to emerge from the ground. Note the square element visible on the front side of the warriors’ helmets/hats. They also have their clothes on, while Torslunda man is naked, except for the belt and horned headgear. Ritual horned dancer from Finglesham buckle, holding two spears, also has nothing on, while the horned dancer from Ekhammar pendant (Kungsängen, Uppland), holding two spears in his left hand and a sword in his right hand, has his clothes on. Recurring pattern may indeed point to various stages/variants of the same widely spread ceremony/ritual performed by weapon dancers. Another changing item in the images of this type is the square element on the helmet/hat. Take a look at the plates from two Vendel period helmets: Valsgärde 7 (to the left) and Valsgärde 8 (to the right):

These images feature the same character, but in quite a different context: naked Odin directs a warrior’s spear, holding himself a spear in his left hand. On Valsgärde 7 plate the square element is present, while on Valsgärde 8 it is absent. Moreover, on Valsgärde 7 plate Odin does not have a belt, but has bird heads on the horns, while on Valsgärde 8 Odin has a belt on, but no bird heads. Yet another form of bird-horned Odin is a charm featuring only the Norse god’s head. This type is represented by the Anglo-Saxon 7th century object found at Soberton, Hampshire in 2002, and the Viking artefact found at Staraya Ladoga, Russia (below to the left).

The latter image is interesting in connection with two items displayed at the British Museum, London, as terminals of drinking horns (photo above to the right by Thorskegga, all rights reserved, used by permission). The similarity with Staraya Ladoga object is so striking, that one may suggest these two terminals were once used for a helmet/hat worn by weapon dancers during the ceremonies discussed above. As for Torslunda die image, its connection with berserkers or úlfhéðnar seems unlikely. If Odin protected berserkers, why one of them should wound him in the heel? I would rather connect this image with the idea of Odin’s encounter with the wolf Fenrir during the events accompanying the end of the present world (Ragnarök). If so, the image on another Torslunda matrice featuring a man with an axe who ties a large beast (also present on a plate from Vendel 1 helmet) may be an image of Tyr who ties Fenrir.