Marriage Imperative of the Viking Age 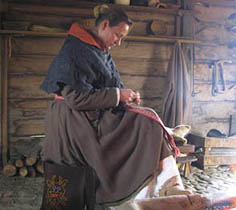 In September 2008 Dr James H. Barrett, who is deputy director of Cambridge University’s McDonald Institute for Archaeological Research, published a paper that provoked lively discussion. The paper was entitled “What caused the Viking Age?”. It was published in Antiquity v.82 n.317, pages 671-685 (available for subscribers here). The Viking Age began dramatically in 793, when Norsemen ransacked and destroyed the abbey of Lindisfarne. Very soon Europe fully realized why Jordanes, Gothic historian of the 6th century, wrote that Scandinavia was officina gentium (“the source of races”): large bands of Vikings moved from their native lands in hopes of acquiring wealth.

Clerics and lay people prayed throughout Christian lands looted by Vikings: Domine, libera nos a furore normannorum (“Lord, save us from the rage of the Nordic people”). Ever since shocked Europeans have been wondering, why it all happened, why Norse warlords poured out of Scandinavia in the 8th century.

Dr Barrett reviewed the main suggested causes that are usually advanced to explain the beginning of the Viking expansion, and dismissed them. For instance, the development of the Viking longship cannot be the reason of the Viking Age. It is a pre-requisite, but not a trigger. Moreover, sailing time from Norway to Ireland is rather short, and Norsemen were able to raid Ireland much earlier than in the 8th century. Actually, an earlier migration from Scandinavia to Britain took place in the 5th and 6th centuries, which did not lead to devastating effects of the Viking Age. According to Dr Barrett, other reasons, like climate change, overpopulation and the state of economy in Scandinavian lands are no better. The point of Dr Barrett’s research is that the true cause was selective female infanticide.

Killing of female newborns practiced by Vikings might well lead to shortage of Scandinavian women eligible for marriage. Intense competition among male warriors forced them to leave Scandinavia to find wives and establish their own households. It is interesting that much of the plundered bounty, particularly from British monasteries, was found in the graves of Viking wives. Dr Barrett adds that the other reason was the Norse idea of honor and religious fatalism of the Vikings. However, the researcher has to admit that Vikings still “highly valued” women, despite the female infanticide. The sumptuous burial in the Oseberg ship is in fact a rich grave of two Viking women.

There is hardly only one straightforward answer to the Viking question. Nevertheless, Dr Barrett’s research surely adds to our understanding of the Viking Age triggers.