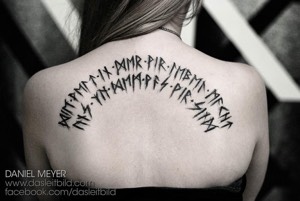 What would you feel if you saw a guy with a runic tattoo? Many would probably feel uneasiness, including myself. The question is why. I perfectly know that ancient Germanic peoples used the Elder Futhark not because they were white supremacists. I realize that vikings used the Younger Futhark not because they were racist skinheads. So where comes the uneasiness from? Let’s take another example. If you use the Bluetooth technology on your mobile phone, you should remember their logo. Do you? It is actually a bindrune, that is two blended runes: Hagall (hail) and Bjarkan (birch). These two represent the initials of the 10th century viking king Harald Blåtand (Bluetooth), who ordered the Jelling stones to be erected. Bluetooth team are certainly not a hate group, and their rune logo does not scare people away from buying their technology. However, tattooed on someone’s shoulder, it may make others feel uneasy. The question remains: why? My answer is: because western civilization has been too long obsessed by Classical Antiquity as its treasured source. All we usually know about Norse or ancient Germanic symbols is that nazis used them and neo-nazis still use them. That’s not a lot. The other answer is: many people with Christian background still feel that heathen convictions may be dangerous, especially if associated with Norse or Scandinavian culture (or with anything ancient Germanic). Even atheists have been educated in schools long dominated by Christians who admired Classical Antiquity. “Virgil and Homer, not Edda and Beowulf” has been their slogan for many centuries.

True, Norse heathen symbols were used by Nazis. For instance, the Hagall rune used in the Bluetooth logo is present on the SS Totenkopfring. In his description of the ring, Himmler wrote: “The swastika and the Hagall-Rune represent our unshakable faith in the ultimate victory of our philosophy.” This rune was also used during the SS wedding ceremonies. Does it mean that the Hagall rune is in itself a hate symbol? No way.

The origins and the cultural meaning of Norse symbols or Germanic heathen symbols, which may point to racism in certain contexts, are treated in a series of articles on this web site:

Next post: Norse Rune Symbols and the Third Reich