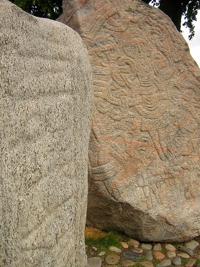 The Jelling stones are two massive runestones standing in a churchyard in Jelling, Denmark, between two large mounds. Both date to the 10th century. The older and the smaller of the two was erected by Gorm the Old in memory of his wife Thyra. The Larger stone was erected by Harald Bluetooth in memory of his parents, his conquest of Denmark and Norway and the conversion of the Danes to Christianity. This stone has a figure of Christ on one side and a serpent wrapped around a lion on another side. Since king Gorm was the first king of all of Denmark, it is generally considered that the Jelling stones declare the birth of the Danish nation.

Both the Jelling church and the stones are put by UNESCO on its list of World Heritage Monuments. Recently experts from Denmark’s National Museum examined the two stones and discovered that they are steadily eroding because of the cold and wet climate. The smaller stone was deemed to be in extremely critical danger of deterioration. The larger stone was considered to be in worrying condition. It was suggested to move both stones indoors to better preserve them. However, experts from UNESCO did their own research and concluded that the stones should be left at their present location, despite the calls from Denmark’s National Museum.

The inscriptions on the Jelling stones read:

King Gorm made this monument in memory of Thyra, his wife, Denmark’s salvation

King Harald ordered this monument made in memory of Gorm, his father, and in memory of Thyra, his mother; that Harald who won for himself all of Denmark and Norway and made the Danes Christian