Vikings in England: A Historical Commentary 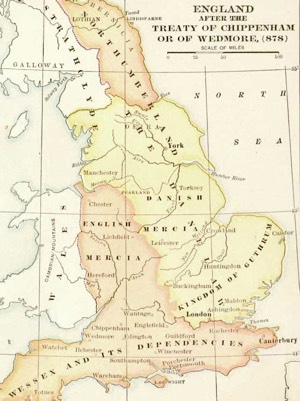 Comments by Professor Jobling and Dr King quoted in my earlier article on the Viking genetic heritage in northern England may need some explanation. Danelaw, according to the Anglo-Saxon Chronicle, is the territory in Britain, where the laws of the Danes for a certain period dominated those of the Anglo-Saxons (see the map). The first wave of Viking settlers came in 865 with the “great heathen army” (mycel hæðen here) led by Ivar the Boneless, Ubbi and Halfdan. In 867 they captured Northumbria and its capital, York. Recently deposed king of Northumbria, Osberht, and Ælla, the usurper, united against the invaders, but their army was defeated and they both were killed. The Anglo-Saxon kingdom of Deira now belonged to the Vikings. In 869 Ivar and Ubbi moved to the East Anglia, defeated the local army and killed the king Edmund who was proclaimed saint. In 870 Halfdan led the Danes to Wessex where they captured Reading. After Æthelred and Alfred defeated the Vikings at the Battle of Ashdown, the Danes went to Mercia and conquered it in 874.

The Viking army was now divided: Halfdan returned to Deira, where he fought Picts and Britons from Strathglyde, whereas Guthrum with two other chieftains went to East Anglia, to Cambridge. A large territory that included modern Yorkshire, Nottingham, Lincoln, Derby, Leicester and, possibly, some lands to the south of the River Welland, now belonged to Vikings. In 878 Guthrum attacked Wessex and captured Chippenham. However, Alfred sieged the city for two weeks and forced Guthrum to conclude the treaty known as the Treaty of Chippenham or of Wedmore. According to one of its clauses, Guthrum had to be baptized. Attacks of the Vikings ceased for some 14 years. In 886 Alfred concluded with Guthrum another treaty that protected life and property of the Anglo-Saxons who lived in Danelaw. However, when in 892 a Viking chieftan named Hasten appeared in the mouth of Thames with his 80 ships, the war broke out and for the next four years Vikings from Northumbria and East Anglia supported Hasten against the Anglo-Saxons. Alfred died in 899; his successor Edward continuously attacked the Danelaw to finally defeat it by 924.

Beside Edward, in the beginning of the 10th century, another enemy threatened the Danes in England: Norwegians from Ireland who penetrated into the lands north of Whirral. One of the reasons of their migration might be the establishment of an Irish royal dynasry in Dublin about this time. It is known that in 902 a Viking chieftain called Ingimund left Ireland and went to northern Wales. Expulsed from there, he attacked Chester. Colonization by Vikings is attested by place names in both north-western England and south-western Scotland. When the English defeated the Danes at the Battle of Tattenhall in 910, another Norwegian Viking chieftain named Rögnvald seized power in York and proclaimed himself a king. This brought to an end the struggle between the Danes and Norwegians in this area that lasted more than 50 years. However, by that time the Viking kingdom on mainland Britain only had to exist for 14 years more. In 924 it was to be absorbed into England.