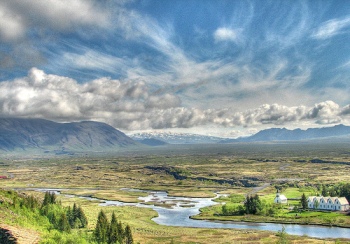 Viking society of the 10th century in Iceland was a democracy of free men, böndr (singular: bóndi) who worked on the land that they owned. As it seems, rural community, hreppr, originally united people who first came to Iceland on the same ship. From among chieftains, höfðingjar (singular: höfðingi) a priest, goði (plural: goðar), was elected. A goði presided over the local assembly, þing (often spelled ‘thing’).

Initially, there were 39 goðorð (plural same as singular) in Iceland, alliances run by as many goðar, who provided for defence and appointed judges to resolve disputes. Each goðorð had its own þing. Members of such a community, þingmenn, did not depend on their goði either economically or politically: he was a free bóndi among other free böndr.

The alþingi (also spelled ‘althing’, literally ‘assembly fields’), that is an assembly of all Icelanders, was held each year for two weeks in midsummer at Þingvellir (‘assembly meadows,’ see the photo above). The central place of the alþingi was the lögberg (‘law rock’), where people held speeches. Simultaneously, lögrétta, supreme legislative and judicial council, was gathered, which consisted of all the goðar. This council chose the lögsögumaðr, the lawspeaker, whose duty was to remember and to proclaim the laws.

During the Viking Age, there were no other government bodies in Iceland. Executive power was in the hands of all free men, which often meant that it belonged to eminent chieftains, stórhöfðingjar. The Icelandic alþingi was first created in 930 AD. Along with the Faroese Løgting and Manx Tynwald, it is among the oldest parliamentary institutions in the world. The only period when it was discontinued was from 1799 to 1844.

Next post: Guðlaugur Friðþórsson: Icelandic Seaman Who Survived After 6 Hours in Ice-Cold Water