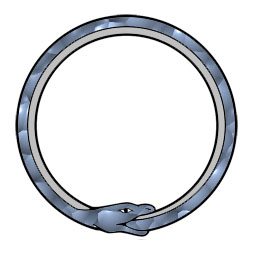 The seventh tattoo of Alyssa Milano (“Charmed”) is an ouroboros tattoo. It’s on her right wrist. In an interview Alyssa commented that she got it after her divorce and that for her it’s a symbol of rebirth. Translated from Greek, ouroboros means ‘tail-devouring’. It is a very ancient symbol depicting a serpent swallowing its tail and forming a circle. In alchemical tradition, as well as in Gnosticism and Hermetism ouroboros was associated with cyclicality. However, the origin of the myth about the giant serpent that encircles the whole world and devours its own tail, lays in the much more remote past. It was an important part of the mythical worldview of the ancient Indo-Europeans.

The idea is best preserved in Norse Germanic mythology. Inhabitants of ancient Scandinavia believed that Midgard, the world of men, is encircled by the serpent Jormungand, one of the three children of the evil god Loki and the giantess Angrboda. The monster was growing too fast and Odin threw it into the ocean surrounding the earth. However, Jormungand grew so huge that he finally spanned the whole world. He lies deep in the waters and bites his own tail.

According to Norse mythology, at the end of this world Jormungand will spew his poison over the earth and sky. Thor will kill the serpent, but will die himself poisoned by his venom. Beside Jormungand, in Viking apocalyptic beliefs also Loki, Fenrir, Hel and the army of the dead play an important role. In the Norse myths Ragnarök, when the gods will die, is not only the end of the existing world, but also a beginning of a new reality. Thus, the world serpent, also in Scandinavian pagan beliefs, is connected with the idea of rebirth.