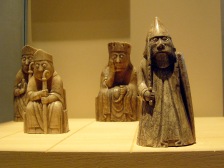 The Lewis chessmen were probably made in Norway about AD 1150-1200 by craftsmen in Trondheim, where similar pieces have been found. Some researchers think that the chessmen were lost or hidden during their transportation from Norway to Viking settlements on the east coast of Ireland. They were discovered in 1831 in the vicinity of Uig on the Isle of Lewis, Outer Hebrides, Scotland, under rather unclear circumstances.

According to a local legend, the Lewis chessmen were stolen by a cabin boy from a ship anchored in Loch Hamnaway soon after 1600 AD. A local cowherd known as Ghillie Ruadh killed the boy and buried the chessmen at Uig. Before being hanged in Stornoway for other crimes, Ghillie made a dying confession concerning the murder of the cabin boy. The trove with the pieces was discovered three hundred years later by a certain Malcolm Macleod from Pennydonald who sold them to Captain Roderick Ryrie. All that is certain is that in April 1831 Ryrie exhibited the chessmen at a meeting of the Society of Antiquaries of Scotland. Soon after, 10 pieces were sold to Kirkpatrick Sharpe and the rest purchased on behalf of the British Museum.

The Lewis chessmen are 78: there are 8 kings, 8 queens, 16 bishops, 15 knights, 12 rooks and 19 pawns that belonged to at least five different sets. The majority of the pieces are of walrus ivory and a few of whale teeth. Along with the chess pieces, 14 round tablemen for the game of tables were found, as well as an ivory belt buckle, with the total of 93 artifacts. None of them was used much before hidden or lost.

According to some reports, a few pieces were stained red when found, so the chessboard may have been red and white. The knights are shown mounted on horses, holding spears and shields. The rooks are warders with a shield and sword (some of them are portrayed as berserkers who bite their shields in fury). For modern audience the glum expression of many pieces seems rather comic, whereas for contemporary Viking chess players these should embody strength, ferocity, and, in some cases, wise contemplation. The pawns have the shape of small obelisks.

Early in 2007 a dispute concerning the appropriate place to display the Lewis chessmen arose. Linda Fabiani, the Scottish Culture Minister, stated that it is unacceptable that 82 pieces are in the British Museum, while only 11 pieces are in Scotland. In response, UK Culture Minister Margaret Hodge has dismissed such a position as “nonsense”, pointing that no one requires the mummies in the National Museum in Edinburgh sent back to Egypt. It has also been stated that between about 1150-1200, when the chessmen were probably made and buried, the Western Isles were part of Norway, not Scotland. Until now the controversy does not seem to be quite settled.

Next post: Viking Ships Found Over the Last 12 Years