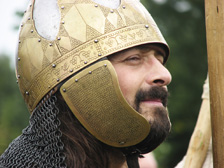 Today is the third and the last day of the conference Between the Islands: Interaction with Vikings in Ireland and Britain in the Early Medieval Period hosted by the Department of Anglo-Saxon, Norse, and Celtic of the Cambridge University. “The rehabilitation of the Vikings is nothing new to academics, but it is surprising how enduring the myths are,” said Dr Máire Ní Mhaonaigh, convenor of the conference.

Indeed, Vikings have had a rather bad press since 793, when they ransacked Lindisfarne. The entry of the Anglo-Saxon Chronicle for that year characterized Vikings’ actions as “rapine and slaughter” and these two notions remained central in Europe’s understanding of Scandinavians who settled in early medieval Britain and Ireland. “Of course, initially there were extremely destructive raids,” continues Dr Mhaonaigh, “but over the four centuries covered by our conference they became completely integrated.”

New evidence uncovered at the conference suggests that Norse Vikings were in fact model immigrants. Between the 9th and 13th centuries, they became part of social and political life in their new home, living side-by-side in relative harmony with their Anglo-Saxon and Celtic contemporaries. They inter-married, and often converted to Christianity, which also helped the integration process. There was no clear-cut opposition between the Vikings and the “natives”: Norse, Anglo-Saxon and Celtic cultures started to intermingle, and all the three communities were mutually transformed in the process.

Some Viking chieftains learnt to speak English, Welsh and Irish as well as Latin, and sometimes adopted Anglo-Saxon names. Even after the Battle of Hastings many people with some element of Scandinavian identity lived happily in the Anglo-Saxon environment. Vikings also borrowed from the Celts: their literature is clearly influenced by Celtic folklore. It has also been found that many runestones combine Scandinavian inscriptions with Celtic designs.

What has been labelled as an “invasion” actually led to the creation of trans-national identities, the Cambridge conference reveals. Such a process undoubtedly has particular relevance to modern Britain.