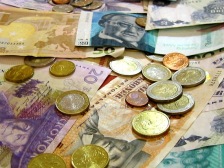 Due to the world’s economic crisis, Straumur-Burdarás, the fourth-largest bank of Iceland, was nationalized Monday. It was the last independent Icelandic bank after the top three banks of the country collapsed within a week about six months ago. All deposits of Straumur-Burdarás are fully secured. William Fall, CEO of the bank, has resigned. In February Straumur-Burdarás announced the loss of nearly EUR 700 million (USD 892 million) after taxes in 2008. This is the highest loss ever reported by an Icelandic company. The capital position of the bank was negative by ISK 20 billion (USD 177 million, EUR 139 million). Its debts amounted to ISK 255 billion (USD 2.3 billion, EUR 1.8 billion). Representatives of the bank are dissatisfied with the course of events that led to its nationalization and criticize Icelandic authorities. Straumur-Burdarás claims that on Saturday the executives of the bank were offered to explain the situation to officials from the Ministry of Finance and Business Affairs, the Central Bank and FME (Financial Supervisory Authority of Iceland). According to the bank’s version, Straumur-Burdarás representatives were given one hour to provide an explanation and were able to demonstrate that the bank could pay impending debts. Chairman of FME, Gunnar Haraldsson, claims this story is untrue. Minister of Finance, Steingrímur J. Sigfússon, also cannot recall such a meeting, even though he confirmed that William Fall called him on Saturday.