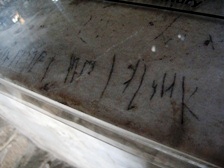 Tagma ton Varangion, the Varangian Guard, was first created in the Byzantine Empire under Basil II Bulgaroctonus (Slayer of the Bulgars), one of the outstanding Byzantine emperors. After the death of John I Tzimisces in 976, who governed the empire before Basil, two powerful generals revolted and received military support from Georgia and Baghdad. Basil II and his great-uncle, Basil the chamberlain, were able to defeat them by 989 only with the help of Vladimir of Kiev.

There were many Scandinavians among Russian soldiers who faught for Basil II under Vladimir, and some Varangians eventually remained in Basil II’s service. The emperor distrusted the native Byzantine guards and employed the Vikings, who came from Russia, as his personal bodyguards. New recruites from Scandinavia came to serve in the Varangian guard until the late 11th century. Military service in Miklagard (the Great City, thus Vikings termed Constantinople) was so popular that Sweden passed a law according to which no one could inherit while staying in Greece. Viking mercenaries who fought for Byzantians but were not members of the Varangian Guard, were known as Megali Eteria (the Great Companions). They took part in Byzantine naval expeditions against Crete in 902 and 949. They participated in the Italian expedition in 936. They also faught Arabs in Syria as part of the Byzantine army in 955.

These Vikings lived in Constantinople for long periods and they certainly visited Hagia Sophia, the greatest Christian cathedral of the empire. Their presence is attested by runic inscriptions found there. The first one was discovered in 1964 on a parapet on the top floor of the southern gallery. The inscription is not well preserved so that only a fragment can be deciphered: -alftan, which certainly stands for Halfdan. The second inscription was discovered in 1975 in a niche in the western part of the same gallery. It contains the name Ári or Árni. Five more possible runic inscriptions in Hagia Sophia were reported to the Norwegian Runic archive in 1997. Many others are possibly waiting to be found.