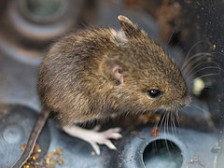 The house mice (mus musculus domesticus) are largely dependent on dense human settlement for food, so they may serve as a good indicator of human migrations and trading links. The study by Professor Jeremy Searle, from York University, published in Proceedings of the Royal Society B: Biological Sciences in October 2008, analyses the genes of 328 mice from 105 localities in the UK.

The difference in mitochondrial DNA shows that one distinct strain of mice from the northern and western peripheries of the British Isles probably arrived with the Norwegian Vikings. Another strain of mice found on mainland Britain show some of the same DNA sequences as mice from Germany. Researchers believe this might be a link to Bronze Age human migrations, beginning about 2300 BC. Professor Searle hopes that future studies will help to learn more about other Viking migrations. For instance, mice could resolve the dispute concerning the settlement of Iceland.

According to a version, Iceland was home to multiple Viking settlements, each with a different home base. Other historians think that the Hebrides served as a pit stop for Vikings on their way from Norway to Iceland. The answer may be concealed in the DNA of Icelandic and Hebridean mice. No less interesting might be a discovery of Viking mice DNA in North America.