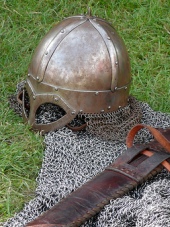 The results of the study led by Professor Mark Jobling of Leicester University, Professor Stephen Harding and Professor Judith Jesch of Nottingham University, published in Molecular Biology and Evolution in February 2008, show that up to 50% of the blood of men in Wirral in Merseyside and West Lancashire is specifically linked to Scandinavian ancestry. This is about the same as modern Orkney, well known for its Viking links. From generation to generation, DNA of the male Y-chromosome is passed along the paternal ancestry; the team of researchers took advantage of the fact that surnames are also passed along the same lines. The method proved to be especially powerful being applied not to individuals but whole populations.

Thus the group of volunteers had to be selected according to certain areas and specific surnames present in these areas at least prior to 1600. After their expulsion from Dublin in 902 AD, Vikings led by a chieftain named Ingimund landed along the north Wirral coastline between the lighthouse at Lingham (Old Norse lyng holmr), Meols (melr), West Kirby (kirkjubyr) and Thurstaston (Þórsteinns tún). They spread as far as south Chester and Mersey to populate South West Lancashire, where they met another large group of Vikings.

Place names pointing to an area of intense Viking settlement played a major role in the study: for instance, Thingwall is a name of a Viking assembly, and the only two places with such name are in the North West, one in Liverpool and one in Wirral. Other Viking place names include Irby, Skelmersdale, Aighburth, Formby, Crosby, Toxteth and Croxteth. Even Tranmere (and, accordingly, Tranmere Rovers F. C.) is a Viking name: in Old Norse Trani-melr means Heron Sandbank.

Then one had to select 100 volunteers who possessed a surname pointing to Viking links and whose male ancestors lived in the same area for as long as one could trace. To this end, the team of researchers used historical records that included tax lists dating to the time of Henry XIII, as well as a list of inhabitants who had promised to help pay for a priest in Ormskirk in 1366. The surnames included: Taylor, Forshaw, Rigby, Rimmer, Robinson, Oxton, Scarisbrick and Melling.

The gurus on Viking DNA from Leicester University have secured the funding to continue their study and see how far Norse Viking blood runs into Cumbria. More details on Wirral and West Lancashire 1100th Viking Anniversary Home Page by Professor Stephen Harding.

Previous post: Tolkien’s Sigurd and Gudrun Coming in May