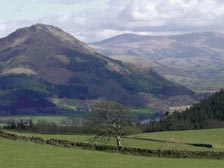 In March 2004 amateur archeologist Peter Adams found two Viking copper brooches on a farmland in Cumwhitton, near Carlisle, Cumbria, using a metal detector with permisson from the landowner. Mr Adams immediately reported this important find under the Portable Antiquities Scheme. This led to the discovery of six Viking graves, dating from the early 10th century, in September of the same year. The burial of four warriors and two momen, within 10 meters of each other, yielded swords, spears, horse harness, spurs, firemaking materials, brooches, belt fittings and bracelets of polished jet, a prized form of coal. This rich trove of artifacts in an area with no earlier records of Viking remains caused international excitement.

The bodies were buried in the east-west Christian alignment, but had everything that they would need in the afterlife according to Norse pagan beliefs. One especially interesting find was a drinking horn obviously intended for the eternal feast in the next world. Sir Neil Cossons, the chairman of the governemt agency English Heritage that engaged Oxford Archaeology North to explore the site, said that the find in Cumwhitton provided rare evidence of Vikings as settlers who integrated into English life. Indeed, the Cumbria burials were characteristic of a peaceful and settled community.

Among the earliest archeological finds related to Vikings in Cumbria were pommel, grip, guard and 40cm of the blade of a Viking sword found in Rampside in 1909. These possibly indicated to a burial nearby, but it was never discovered. In January 2005 a metal detector enthusiast unearthed an ornate merchant weight on a farmland in Low Furness, Cumbria. The piece was inlaid with bronze and enamel and depicted entwined mythic dragons and two warriors with crossed swords.

According to Steve Dickinson, Lancaster University archeology tutor, this might eventually lead to the discovery of a “high status” Viking burial site: “You don’t just drop something like this and walk away,” he said. However, no new finds from the site have been announced ever since.

Thus, the graveyard in Cumwhitton remains unique not only in Cumbria, but in the whole of England. A larger Viking burial site discovered in Repton, Derbyshire, had 249 graves of warriors. However, it was not a regular cemetery, but something dug in all haste on a battlefield. Another site, at Heath Wood near Ingleby, Derbyshire, had 59 barrows with remains of cremated warriors. This is thought to be a war cemetery of the Viking Great Army of AD 873-8 (the mycel here of the Anglo-Saxon Chronicle). Unfortunately, it contained only a handful of artifacts.