Max Payne, a 2001 Remedy Entertainment video game and 2008 noir action film with Mark Wahlberg and Olga Kurylenko (Quantum of Solace Bond girl), features several meaningful allusions to Norse mythology. Valkyr, a drug invented to improve morale of the U. S. soldiers but halted due to unwanted side effect, is reminiscent of valkyrie (Old Norse valkyrje, which literally means ‘chooser of the slain’, the root val being the same as in Valknut, ‘knot of the slain’).

In the game and the movie valkyries seen by those who take Valkyr are male demonic creatures. Quite on the contrary, in Norse mythology valkyries are female. Valkyries choose warriors dying in battle: those who were brave become einherjar and after their death go to Valhalla (‘hall of the slain’) where they are served by valkyries. In Max Payne, Valhalla Project is the government-funded conspiracy that created Valkyr. In the movie, when Max (Mark Wahlberg) and Mona (Mila Kunis) try to find out the meaning of the wing tattoo that both Michelle, Max’s wife, and Natasha, Mona’s sister, had, the tattoo artist (Stephen R. Hart) tells them that Vikings used wing tattoos for protection in battle.

It is interesting that the tattoo artist has a Vegvísir, or Runic Compass, on his left shoulder. Björk has the same tattoo on her left upper arm.

Michelle, Max’s late wife, worked for Aesir Corporation, based in Aesir Plaza. Norse æsir (singular áss) were one of the two groups of the Viking gods in the Scandinavian pantheon. CEO of the Aesir Corporation is Nicole Horne: her name may point to Horn Triskelion or to Gjallarhorn, the mythic horn, which will announce the end of the world. 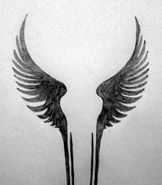 The other name with apocalyptic overtones is Jack Lupino. In Italian, lupino means wolfish. According to Norse mythology the wolf Fenrir kills Odin during the events of Ragnarök (Old Norse ‘final destiny of the gods’), when the world in its present form perishes. This also explains the name of the night club Ragna Rock, Lupino’s lair. The surname of Max’s partner, Alex Balder, shot by a killer, refers to god Balder whose death is described in Edda as a tragedy and a sign of the coming Ragnarök. The surname of Alfred Woden (video game only) is the Anglo-Saxon variant of Odin. Like the Norse god, Alfred Woden is single-eyed.

Asgard Building where Max Payne talks to Woden is reminiscent of Ásgarðr (Old Norse ‘enclosure of the æsir’), the city or country where gods dwell. Yggdrasil, the computer network in the military base, refers to the world tree that stands in the middle of Asgard.

Finally, the snowstorm that takes place in Max Payne may refer to Fimbulwinter, a terrible winter that precedes Ragnarök.

Copyright Notice: Images of wings on this page are photos of my pencil sketches. If you want to print any of them for your own personal use, please feel free. Do not crop, resize, photo-montage or otherwise alter the photos. Any commercial use is strictly forbidden. If you have a non-commercial site, please contact me to use the photos with a hyperlinked credit: