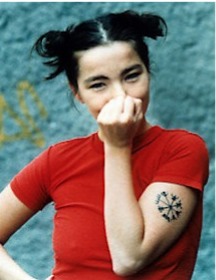 Björk, an Icelandic singer and actress, has a cute symbolic tattoo on her left upper arm. It is a Norse protection symbol called Vegvísir, which has a deep meaning. The Icelandic word literally means ‘guidepost’ or ‘direction sign’. In modern popular culture the Vegvísir is often called Runic Compass or See the Way. It is often associated with the Viking Age, which is not correct: this symbol is from the 17th century Icelandic grimoire called Galdrabók (‘magic book’). The origin of this type of witchcraft is difficult to ascertain: to some extent it derives from medieval mysticism and renaissance occultism, but also has a few connections with the ancient Germanic runic tradition. Vegvísir was drawn on one’s forehead with blood to prevent a person from getting lost. In 2008 movie Max Payne the tattoo artist who explains his theory about Viking wing tattoos, has a Vegvísir tattoo on his left shoulder.

Another Galdrabók symbol, even more popular in symbolic tattoos, is Ægishjálmur (‘helm of awe’). It is believed that this magic sign gives its wearer the ability to strike an enemy with fear and grants great magical powers. In 1667 Þórarinn Halldórsson was burnt in Iceland because he admitted that he carved Ægishjálmur on oak and practiced healing with the aid of magical signs.

Another Icelandic magical sign deserves special attention, since it is reported to give the power to become invisible. Hulinhjálmur (‘helm of disguise’) has to be drawn on a piece of lignite (brown coal) and then pressed against one’s forehead. The most complicated part is the preparation of the ink. One has to collect three drops of blood from the index finger of one’s left hand, three from the ring-finger of one’s right hand, two from the right nipple and one from the left nipple. Then the blood must be mixed with six drops of blood from the heart of a living raven and melted with raven’s brains and pieces of human stomach. This kind of magic was used as the best protection against enemies.