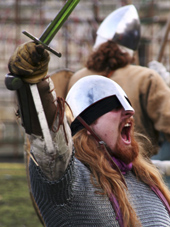 The day before yesterday the 23rd Jorvik Viking Festival in York reached its finale. This long-established festival, celebrating England’s Viking heritage, included a whole range of public events and spanned a wide range of interests. Each of the five spectacular days of the festival had a different theme: Combat Day, Family Day, Invasion Day, International Day and Viking Arts Day. Among special guests who participated in lectures, arts & crafts, drama and action events, was Dan Snow, a TV presenter and historian. York was founded by the Romans as the fortress of Eboracum and later flourished as the Anglo-Saxon trading center of Eoforwic.

Danish Vikings, called by the Anglo-Saxon Chronocle “The Great Heathen Army,” first captured it in November 866 and renamed it Jórvík. Vikings made it the capital city of a kingdom under the same name. Later the kingdom of Jórvík, founded by Danes, was dominated by Norwegians. With a few interruptions caused by the wars with Wessex, this Viking territory on mainland Britain existed from 876 to 954. The last Viking king of Jórvík was Eric Bloodaxe, after whose death in the Battle of Stainmore Jórvík was absorbed into England.

This year the viking festival in York attracted over 40,000 visitors from around the globe, which caused serious traffic delays in the city. It culminated with a battle at the Eye of York in the shadow of Clifford’s Tower. Many festival events were organized by the Jorvik Viking Centre featuring archeological evidence of the Coppergate excavations in York in 1979-81.