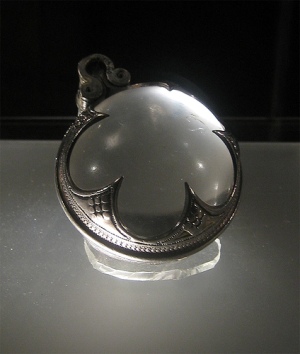 Several 11th century hoards found at Viking sites on the island of Gotland, Sweden, contained biconvex lenses made from rock-crystal. Some of them were set in silver. A few lenses had an almost perfect elliptical shape. The symmetry of the lenses as well as their biconvex elliptical form and fine polish, which resulted in a very good imaging, made a sensation when discovered by modern scientists. The idea of producing at such an early date quality lenses that could be almost as accurate as those of modern optics, was something unheard of. The results of research concerning the lenses from the Viking sites were published in November 1998 by Dr Karl-Heinz Wilms, Dr Olaf Schmidt, and Prof. Dr Bernd Lingelbach from Aalen University of Applied Science (Fachhochschule Aalen).

The late Dr Wilms first heard of rock-crystal lenses from Gotland, an island in the Baltic Sea, in 1990, when he was selecting exhibits for a museum in Munich. The lenses became widely known as Visby lenses, after the major town on Gotland. The team of three scientists arrived there in 1997 to make a surprising discovery concerning the Viking Age technology. After a series of tests it became clear that the quality of the 11th century rock-crystal lenses made on a turning lathe nearly equaled that of modern samples made with CNC machines (CNC stands for Computer Numerical Control).

The use of the Visby lenses is a matter of some controversy. Some of them look like Viking jewelry, but it is unlikely that they were merely ornaments. They could serve as magnifiers, which allowed to carry out fine carving, to start fires or to burn cuts and wounds in order to prevent infection. Taking into account the outstanding quality of the lenses, it was even possible that the Vikings might use them to construct a telescope.

It is unclear where the lenses were manufactured. M. Stenberger believes that the rock-crystal was brought from the Middle East to western or south-western Russia, where it could be set in silver. There it might be bought by merchants from Gotland. According to another version, the lenses were brought to Sweden from Byzantium by a member of the Varangian Guard, personal Viking bodyguards of the Byzantine emperors.

Part of the lenses are exhibited in the Historical Museum in Visby as well as in the Swedish National Museum in Stockholm and other collections. Some of the lenses were lost. Photo: Visby lens displayed at the Museum of National Antiquities in Stockholm. By mararie. Used under the Creative Commons Attribution-Share Alike 2.0 Generic Licence.