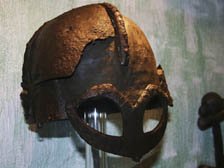 Contrary to a widespread delusion, Viking helmets did not have horns. The only helmet that may be unmistakeably attributed to the Viking armor was found in 1943 in a burial mound near Gjermundbu, Norway. The mound contained many other artifacts of the Viking Age, such as swords, sheath fittings, chain mail and several tools. The Gjermundbu helmet, which dates to ca. 970 AD, is now displayed in the Museum of National Antiquities (Oldsaksamlinga) in Oslo. This Viking helmet was found in nine separate fragments that allow us to study its construction.

The helmet consists of a framework in the form of a horizontal rim and two vertical metal strips, one of which goes from the back of the head to the forehead, and the other from ear to ear. Four plates are fastened to this framework with rivets, thus forming the helmet’s skullpiece. The ocularia, which provided facial and nasal protection, are fastened to the horizontal rim as well. One may suggest that the back and sides of the neck were protected by a chain mail (called aventail or camail). The Viking helmet from Gjermundby also probably had a pike at the apex and a leather chin strap. The ocularia had inlaid decoration. Earlier Scandinavian helmets, such as those which were found in Valsgärde and Vendel, had a more complex construction.

Among the Central European helmets traditionally associated with the Viking Age a few specimens have to be mentioned: helmet of St Wenceslas (St Vaclav) from Prague; helmet from Olomouc, Czechia; helmet from Ostrów Lednicki, Poland. All these were made of one piece of metal.