Countless “introductions to runes” each represent the Germanic Elder Futhark in a standardized form, both as for the appearance of the individual runes and the order in which they are arranged (my earlier post on the Elder Futhark is no exception). However, we should be aware of the fact that getting the real picture implies the analysis of actual runic inscriptions, not their standardized reproductions. Let us consider the two earliest sequential listings of the Germanic Elder Futhark runes “as is”:

The inscription goes from left to right. Note that f, w and r-runes have no twigs; a, s and b-runes are in a mirror image. 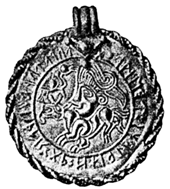 The Futhark inscription begins at 9 and goes to 12 o’clock in the counterclockwise direction (from 12 to 9 o’clock the inscription reads: tuwatuwa). The runes are written from right to left. Note the peculiar form of the p-rune, which looks exactly like b; ï and s-runes are in a mirror image; many runic signs look substantially different as compared to those on the Kylver stone. The last rune is not visible because of the necklace holder, but there is no doubt that it was d-rune (as it appears there on the Mariedamm bracteate, which is almost identical).

Now let us compare the two variants more in detail:

Beside the obvious fact that the inscriptions go in the opposite directions, two more observations should be made: (1) the order of the runes is not the same: groups p-ï and d-o of the Kylver variant go in a reverse order in the Vadstena variant; (2) the Vadstena Futhark is divided into three groups of eight (in Old Norse called ǽttir, ‘families’), beginning with f, h and t-runes. Accordingly, these groups or families of runes were called by the names of Freyr, Hagall and Týr.
Now let us consider the structure of the families on the basis of the rune-order preserved on the Kylver stone (we have to remember that R-rune represents the Common Germanic z):

All this shows that the creator of the Elder Futhark had deep insights into the phonological structure of the language for which he designed this form of writing. It is astonishing how elaborate is the inner code of the runic sequence. Whether or not the ancient rune-masters realized the above phonological peculiarities is not clear, but the inscriptions containing the complete Elder Futhark are very numerous. The full set of runes in this order was believed to have supernatural power.

Copyright notice: photos of Kylver Stone and Vadstena Bracteate used in this article are public domain.