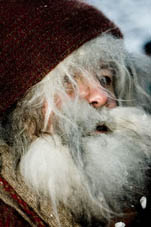 Iceland Christmas traditions are very peculiar. Many of them may well go back to the Viking Age. Christmas in Iceland is closely connected with St. Þorlákur’s day, which is December 23, when they celebrate Thorláksmessa. St. Þorlákur, 12th century bishop and patron-saint of Iceland, was canonized by John-Paul II as late as in 1985. On St. Þorlákur’s day it is a tradition to serve the skate. The reason is that December 23 was the last day of fast and people were not expected to have meat this day. Skate is a very smelly fish, so not everyone, except Icelanders themselves, would dare to taste it.

Christmas in Iceland is taken very seriously: it is not actually just one day of celebration, but a period of 26 days. Christmas season begins December 12, when the first Yule Lad (jólasveinn) comes. These Lads (plural: jólasveinarnir) are creatures who come from the mountains one by one each day before Christmas. They are thirteen in number, so that they are all there by December, 25:

It would be a big mistake to think of them in terms of a group of kind-hearted santa clauses. Quite on the contrary, they are pranksters who delight in tormenting Icelandic farmers (their names witness to the kinds of practical jokes they indulge in). From December 12 until Christmas Eve children put a shoe on the window in order to receive a gift or candy from jólasveinarnir. To be sure, naughty children receive a potato instead. Yule Lads’ parents are Grýla and Leppalúði, both trolls. Grýla is a terrifying female creature with hooves and tail who is as old as the Prose Edda (13th century), where Snorri Sturluson mentions her. She puts children into a sack and drags them into the mountains where she eats them.

Somehow related to that family is jólkottur, Yule Cat, who lies in wait for lazy people. Formerly, those who had not helped much during the year, received no new clothes for Christmas: this is why they believe that a child who does not receieve some new clothing in time during the Christmas season is eaten by the Yule Cat. After Christmas the Yule Lads go away one by one, so that the last of them leaves the Icelanders alone by January 6. This day families visit one another and serve great feasts. It is also believed that this day elves celebrate together with humans. For the next three days all the shops in Iceland are closed. On Christmas Eve even television is off air from 5 to 10 pm, in order to leave families undisturbed. If one would like to say “Merry Christmas” in Icelandic, here is how they say it: Gleðileg jól!