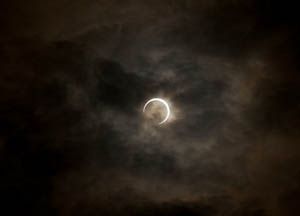 In Norse mythology Sun is a goddess named Sól. She rides a chariot created by gods to illuminate the nine worlds from the burning embers that come out of Muspelheim, the world of fire. Two horses named Early Awake and Very Quick draw the sun’s chariot. Giant wolf, of the species of monsters known as wargs, whose name is Treachery, is constantly chasing Sun’s chariot. Old Norse name of this warg is Sköll. His brother, whose name is Hater (Old Norse Hati) chases Sun’s brother Moon (Old Norse Máni).

Eddas, the chief sources for Norse mythology, state that Sun and Moon are children of Mundilfari, otherwise little mentioned. The wargs are children of Fenrir, monstrous wolf himself and a son of Loki. One day the monsters will run down Sun and Moon and this will be the end of the world. Solar eclipse is thus an attempt of the warg to devour the sun.

Vikings believed that at Ragnarök three winters in a row will come with no spring to revive nature. Then the wargs will swallow the sun and the moon, as described in the Younger or Poetic Edda. The Elder or Prose Edda says that Sól will be devoured by Fenrir. Gods and Einherjar will be killed by monsters, the humankind will perish in fire. But there will be new humanity and new sun, the daughter of Sól, to shine upon people.

Next post: How to Find out If You Have Viking Ancestry