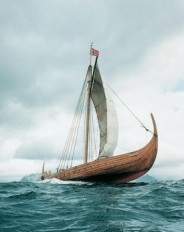 October 7, at a meeting of the Council for Northeast Historical Archaeology in St. John’s, Canada, Dr. Patricia Sutherland presented her research. It shows that wear grooves on whetstones from Tanfield Valley (Baffin Island) had very small parts of bronze, brass and smelted iron. This fact may seem rather natural: indeed, why blade-sharpening tools wouldn’t have traces of copper alloys? The point is that Dorset people, who are indigenous Arctic inhabitants, did not use these materials. Viking metalsmiths did.
The whetstones came from four sites from northern Baffin Island to northern Labrador. These sites had been excavated earlier but the finds were not properly interpreted. In 1999 Sutherland noticed two pieces of cord stored at the Canadian Museum of Civilization. These were from Baffin Island and were not animal sinews twisted into cordage, a technique characteristic for Arctic hunters. They turned out to be yarn expertly woven in a way very similar to yarn produced by Viking women who lived in Greenland. More artifacts from a trove that included wooden tally sticks pointed to Norse travelers, too.
Sutherland’s team worked for ten years excavating the most promising of the sites from which the findings came. It was on the southeast coast of Baffin Island, a place known as Tanfield Valley. Moreau Maxwell, archaeologist from the U.S., had excavated it in the 1960s and found some buildings that he described as “very difficult to interpret.” Southerland discovered a lot of evidence pointing to Vikings: pelt fragments from Old World rats, a whalebone shovel used by Norsemen to cut sod; European stone masonry as well as more Viking yarn and whetstones.
Since L’Anse aux Meadows, a site excavated by Helge and Anne Stine Ingstad in the 1960s, it’s a second proven Viking outpost in North America. It may correspond to Helluland, a place visited by Leif Eriksson before he headed to Vinland.
The site has traces of several occupations. Radiocarbon dates show that it was still inhabited in the 14th century. As the artifacts pointing to Viking presence in the area come from several places separated by a thousand miles, Southerland thinks there was a transatlantic trade network between Vikings and native Arctic people.
It’s a great discovery. Norse presence in North America has been a subject of hot debates for decades already. Convincing evidence from Baffin Island provided by Sutherland and her colleagues uncovers a whole new perspective on it.

Previous post: Fierce and Fair: The Valkyries of Norse Legend