Fierce and Fair: The Valkyries of Norse Legend 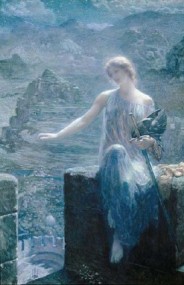 I’d like to thank Viking Rune for inviting me to write a guest post here on his blog. The subject that naturally sprang to mind for me was the Valkyries.

Norse mythology is filled with memorable stories and themes that still echo within our hearts and minds centuries after they were created. One part of those legends that has inspired me is the Valkyries. And I am not alone, the Valkyries have inspired everything from operas to video games, comic books to paintings, sculptures to episodes of Xena, Warrior Princess. So what do we know about the Valkyries?
Let’s start with the name. Valkyrie comes from the Old Norse valkyrja which means “chooser of the slain.” That’s fairly straightforward, except there is some confusion as to whether or not they choose who will fall in battle or just which of the fallen will go to Valhalla. Snorri Sturluson tells us in the Elder Eddas:

…these does Othin send to every battle; they ordain which men are doomed to death, and decide the victory.

But in the Volsunga Saga (the basis for Wagner’s epic opera series) Odin punishes Brynhildr (also called Brünnhilde) for allowing King Hjalmgunnar to die. This implies that Odin makes the choices and the Valkyries simply carry out his will.
The idea of Valkyries not just choosing from those who died in battle but choosing who will die in battle might be connected to one particular member of this band of warrior women – Skuld. Her name can be roughly translated as Future and not only is she a Valkyrie, she is also one of the Norns. The Norns were three female beings who ruled over destiny, deciding the fates of gods and men. So it makes sense that at least one particular Valkyrie – Skuld – could be choosing which warriors are not going to make it through the battle.
Once these warriors die in battle they are brought to Valhalla where they become Einherjar, the host of warriors who will fight beside the gods at Ragnarök. In the meantime the warriors train and fight during the day and then feast at night. In the Gylfaginning Odin says:

This is the basis for the Valkyries also being known as cup-maidens. One of the other kennings for them is shield-maidens which refers to their place on the battlefields, but also suggests their role as supernatural guardians. There are tales of Valkyries who essentially follow one individual throughout their life and help to protect them. One such lucky individual is Helgi. The Valkyrie Sváva acts as his protector throughout his life and he even calls her his “radiant bride.” In Hrómundar Saga we have an individual protected by a woman in the shape of a swan who flies overhead during battles.
We are told in Magnusson & Morris’s translation notes to the Volsunga Saga that there are three different aspects of the Valkyrie: those who are simply of divine origin; swan-maidens who have magical cloaks that allow them to assume the form of the bird; and mortal kings’ daughters who “devoted themselves to warlike deeds and perpetual maidenhood.” These women could be received into the Valkyries’ ranks, but if they fell in love and married, they would then lose all of their power.
The original oral nature of Norse mythology is no doubt partly responsible for the confusing nature of these various accounts. Hilda Roderick Ellis, in her excellent book The Road To Hel writes that the most interesting thing about the Valkyries, for her, is the different guises in which they appear. The Hákonarmál depicts the Valkyrie as noble and dignified women. Fully armored, they sit high on their horses, carrying out the commands of Othin and handing out victory according to his will. Yet the Darraðarljóð portrays them in a much different light – fiercer and cruder. These Valkyries are shown weaving the web of battle, they exult in blood and carnage. They don’t compare to the elegant abstractions of the Hákonarmál; Ellis finds them much more like the creatures from various passages of the sagas who ride wolves, sit in blood-drenched houses and wave bloodstained cloths over those about to fight. There are various examples throughout Norse literature of strange elemental beings who .rejoice in slaughter and the conflicts of men.
Ellis tells how Gustav Neckel also made this distinction between fierce elemental beings and protective supernatural women in his book Walhall. Neckel suggests that an older belief in a type of battle demon can account for the class of Valkyrie who delights in blood and slaughter. He places them closer to the giantesses and hostile to the gods. Neckel sees Freyja as the chief spirit of the other class of Valkyries who are helpful and protective, a class which he calls dísir.
Two classes of Valkyrie, or even three? I have to confess this is the most confusing part for me. Are they singular beings that encompass all these different roles? Are there more than one class of Valkyries as Neckel suggests, each class filling different roles? I still haven’t decided but I’d be interested in reading everyone’s thoughts on this.
If you’re interested in reading more I can suggest the following:

, a novel based on Norse mythology.